The first concert of the spring and summer concert at Ford Park in Beaumont was held this past Wednesday night, and the bar has been set by which all forthcoming events will be compared this year. And the bar was set high.

Godsmack, which is touring in support of its April 2018 release, “When Legends Rise,” opened with the high-energy title track and kept its foot on the accelerator as it performed other hits such as “1000hp” and “Awake,” but also made sure fans were well acquainted with newer material such as “Unforgettable,” “Say My Name,” “Under Your Scars,” and the hit single “Bulletproof.”

Sully Erna, frontman of the Boston-based rock band Godsmack, gets the crowd roaring during the band's nearly two-hour long set at Ford Park in Beaumont, Texas, on Wednesday, April 10, 2019.

Vocalist Sully Erna took a moment to provide some background about the song “Under Your Scars” and informed the audience of the band’s new Scars Foundation, which went into operation earlier this week and will provide assistance to those battling depression and other issues such as bullying, Post Traumatic Stress Disorder and more.

Erna, along with his bandmates Robbie Merrill, Shannon Larkin and Tony Rombola, seemed to be having a fun time on stage as he constantly bantered with the fans and good-naturedly harassed his bandmates and even himself throughout the concert. It is easy to see why the band is so popular with its fans and continues to be heard on rock radio after more than 20 years since the release of its self-titled debut.

Along with the expected crowd-pleasing hits, highlights of the night included performances of the songs “Something Different,” the always entertaining drum battle, “Batalla de los tambores,” and the band’s cover of The Beatles song, “Come Together.”

Los Angeles-based hard rock act Stitched Up Heart opened the show and delivered an inspiring 40-minute set of rock and metal. The group, which is fronted by Alecia “Mixi” Demner, who seems to have been born to be on-stage, performed songs such as “This Skin” and “Warrider,” along with songs “Finally Free,” “Catch Me When I Fall,” “City of Angels” and “Monster,” all of which are from the group’s 2016 release, “Never Alone.”

Straight Out Of Line 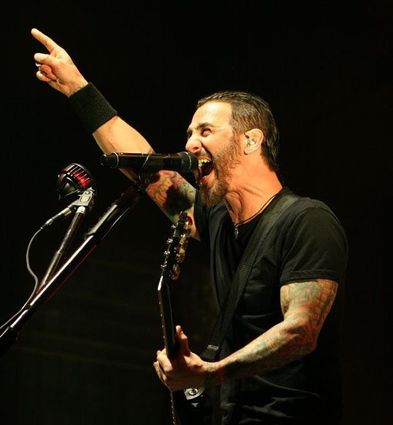 Sully Erna, frontman of the Boston-based rock band Godsmack, gets the crowd roaring during the band's nearly two-hour long set at Ford Park in Beaumont, Texas, on Wednesday, April 10, 2019.

Come Together (The Beatles cover)