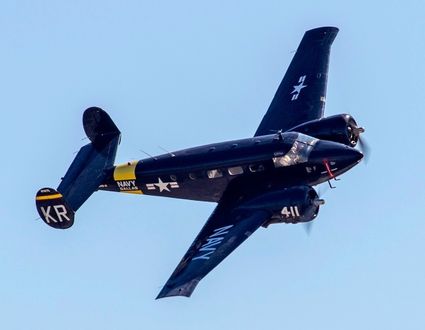 Photo: The Orange County Airport will be hosting a Fly-In from 10 a.m. to 2 p.m. on April 27th at the Orange County Airport located at 2640 S. Highway 87. It is open to the public and admission is free. For those wanting to really get up close and personal, rides will be available for purchase from the Commemorative Air Force Gulf Coast and Houston Wings in a1947 Beechcraft model D18S. In addition, free rides will be given to children ages 8 to 17 years old through the Young Eagles program. The local chapter, Experimental Aircraft Association Chapter 1356 from Leesville, La. , will be on site to introduce and inspire kids in the world of aviation.

"This is the first fly-in the airport will host since Orange County elected to take over all airport operation in June 2018," said Missy Pillsbury, Airport Supervisor at the Orange County Airport. "We are hoping to make it an annual event."

Free admission to this spectacular event is for everyone of all ages. There is something for everyone planned at the Orange County Airport Fly-in including lots of fun. The event is expected to occur rain or shine.

In addition, pilots will be on-site to talk about aviation and showing their aircraft too.

Tours of the airport will give attendees a wonderful opportunity to visit the airport facilities and learn more about the roles the airport and general aviation play to benefit the community, as well as to experience the excitement of aviation first hand.

For those wanting to really get up close and personal, rides will be available for purchase from the Commemorative Air Force Gulf Coast and Houston Wings.

This aircraft is a 1947 Beechcraft model D18S which arrived at Hooks Airport in Spring, Texas in August of 2016 from the former home in Fort Worth.

During and after World War II, over 4,500 Beech 18S saw military service as light transport, a light bomber for China and an aircrew trainer for bombing, navigation and gunnery.

The plane was also used for photo-reconnaissance, and "mother ship" for target drones, including United States Army Air Forces C-45 Expeditor, AT-7 Navigator, AT-11 Kansan; and United States Navy UC-45J Navigator, SNB-1 Kansan, and others.

In addition, during World War II, over 90 percent of USAAF bombardiers and navigators trained in these aircraft.

The Young Eagles program, provided by the Experimental Aircraft Association Chapter 1356 from Leesville, La., will be on site to introduce and inspire kids in the world of aviation. They will be offering children ages 8 through 17 years old a free ride in an airplane. Parents will be able to sign their children up for rides at the sign up table during the Fly-In. Flights will start at 2 p.m. These flights are made possible through the generosity of EAA member volunteers. Signing up as early as possible is encouraged since the number of flights may be limited.

Launched in 1992, the Young Eagles program has dedicated more than 25 years to giving children and teens their first free ride in an airplane. It is the only program of its kind, with the sole mission to introduce and inspire kids in the world of aviation.

As a result, more than two million children and teens have enjoyed a free introductory flight through the Young Eagles program. These flights are made possible through the generosity of EAA member volunteers.

Each Young Eagle will experience a safe and enjoyable flight which will give them new perspectives on the world and life in general. Young Eagles program participants will understand an individual's potential is unlimited and for them the sky is the limit.

The pilots participating in the Young Eagles program are local members of EAA who are volunteering their time and aircraft to make the child’s flight possible. Each pilot is licensed by the FAA. All aircraft are likewise licensed by the government.The flights are conducted according to federal regulations. No aerobatic maneuvers are performed. More information is available on site from volunteers

A food truck, Bullfish, will be on site for delicious food items. Their menu will include jerk chicken rolls and fajita rolls with pepper jack cheese. They will also have pulled pork tacos with slaw and shrimp tacos with slaw. For a sweet treat they will have beignets and churros. Side items such as fries and sweet tater tots are available too. Finally, there is bottled water and soda for sale to wash it all down.

Pilots attending the fly-in will receive a free lunch and reduced fuel prices.

"We encourage everyone to come and share the adventure of flying with us," Pillsbury said.