The petrochemical giant that earlier this year declared its interest in locating a $5.8 billion ethylene plant near the Orange County Airport during appearances at the West Orange-Cove and Bridge City school districts, came calling on Orange County Commissioners’ Court at mid-day.

Then the “proposed Chevron Phillips Chemical Company LP Project” was on the agenda for the Orange City Council Tuesday night.

Both meetings were closed to the public.

Chaney Moore, real estate and property tax manager for Chevron Phillips Chemical, left, spent an hour in closed session with the Orange County Commissioners’ Court members Tuesday to update them on a proposal to build a $5.8 billion plant in Orange County.

Chaney Moore, the company’s Woodlands-based real estate and property tax manager, told The Record that Orange County was “our preferred location – but not our only one.”

That seemed like a bit of a promotion from saying Orange was “only one of the finalists,” which was the company line back in January.

Moore spent about an hour in closed session Tuesday afternoon with the four commissioners, County Judge Carl Thibodeaux and Denise Gremillion, counsel to the court.

Moore termed his visit with commissioners strictly informational: an introduction to the project for new members of the court.

“We hadn’t talked to two-thirds of the court with the [election] changeover. It was essentially the same conversation we had with some of the commissioners six months ago,” he said.

Commissioners Theresa Beauchamp and Robert Viator joined the court in January, while Thibodeaux has been County Judge, this time, for about a month.

Commissioners’ Court took no action after a presentation and questions-and-answers session with Moore, who was joined in the meeting by Jessica Hill, executive director of the Orange County Economic Development Corporation.

“I don’t see that happening anytime soon,” was what one commissioner said when asked how long it would be before the county took a vote on a financial enticement for Chevron Phillips.

Turned out the company sent no representative to Tuesday night’s city council meeting. Jay Trahan, the city’s economic development director, said he merely provided council with an update on the project.

Jay Trahan, along with Commissioners Johnny Trahan and Viator, are members of the OCEDC board of directors.

According to paperwork filed by the WOC and BC school districts on the Texas Comptroller website, construction could begin by 2020 with operations commencing in 2024.

Moore said the company would employ between 7,000 and 8,000 construction workers to build the plant. He said he expected 300 permanent full-time jobs for Chevron Phillips Chemical employees and 200 additional contract jobs. 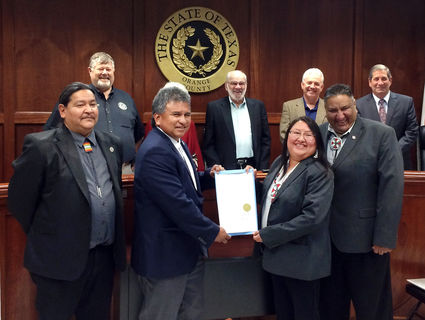 He said there had been delays getting the school districts’ Chapter 313 Value Limitation agreements accepted by the state.

“It’s going back and forth to the comptroller,” Moore said. “They’ve requested some more information, so those will take longer. Hopefully, we’ll start working with the city and the county sometimes this year.

“We’ll probably see something in the next three to nine months.”