OF fifth-graders return to Elementary School 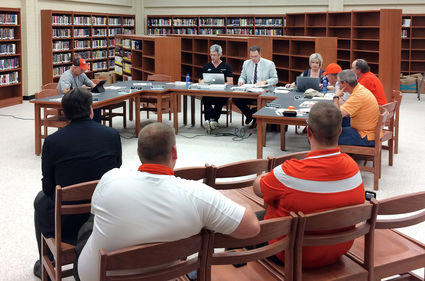 Orangefield fifth-graders will get to be the “big folks on campus” for another year as the district has announced that for the first time in almost 40 years, fifth grade will be part of Orangefield Elementary School next fall.

“Fifth graders were moved to the junior high in 1982, because of space problems,” schools superintendent Stephen Patterson explained.

“They’re better suited to be on an elementary school campus than in junior high, and now we have the space at the elementary campus.”

Classrooms were added in both the elementary and high school buildings as the school district has spent more than $8 million in repairs and improvements after Tropical Storm Harvey.

Orangefield school board members were full of good news to taxpayers at Monday night’s monthly meeting.

The meeting was held in the newly relocated High School Library, which still showed plenty of empty shelves as work continues by staff to move in.

West Orange-Cove joins Orangefield with 20 percent, while Vidor and Little Cypress-Mauriceville are at 15 percent.

Shaun McAlpin, assistant superintendent, told board members that in addition to keeping the 20 percent homestead exemption, Orangefield ISD will have the opportunity this summer to save the district more than a half-million dollars in interest payments.

That would come by refinancing some 2004 bond debt with lower rates.

The savings will be passed on in lower interest and sinking (I&S) tax rates.

Speaking of money, Patterson said that Deb Gallagher of DRS (Disaster Recovery Services LLP), the federal grants consultant for OISD, believes the bulk of $2.5 million expected FEMA reimbursements will be in the district’s account in August.

Also, McAlpin reported that the district is rapidly repaying a $3 million short-term “bridge” loan it took while awaiting FEMA funds.

“When it’s all said and done, our fund balance will be where it was at before Harvey, at $12 million,” Patterson said.

The trustees honored the district’s teachers of the year.

The boys golf team qualified for the first time to represent Orangefield’s boys at the state golf tournament and Alexis Sturrock and Cooper Lowe qualified for state in CX debate.