Bridge on a Barge 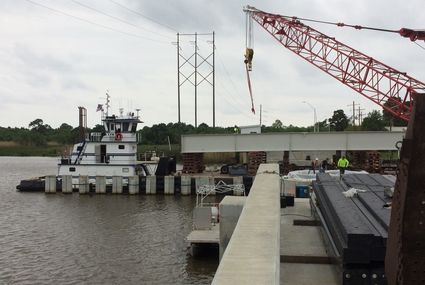 The E. Roundbunch Road swing bridge, which has beens closed for repair for two years, is being removed from a barge and re-installed. The bridge and its historic swing gate works were reconditioned in Channelview. Because of its length (about 150 feet) two barges were joined end-to-end for transport down the Houston Ship Channel, up the intracoastal waterway and up Cow Bayou. The trip took 18 hours over two days for Peninsula Marine, said Luis Morales, Gulf Coast project manager for Ragle, Inc. Morales said the bridge might be installed as early as Friday, but TxDOT Sarah Dupre said it could be several more weeks before the bridge opens to public auto traffic. RECORD PHOTO: Dave Rogers