Pic: Lorrie Taylor, new port director, in front of the historic building that originally housed the Lutcher Moore Lumber Company and is home to the Port of Orange. RECORD PHOTO: Penny LeLeux

When asked about being the first woman to hold the position as Executive Director of the Port of Orange, Lorrie Taylor replied she had never thought about it. “My husband brought it up,” she said, with a laugh.

Lorrie Taylor has been named as the new director at the Port of Orange.

Taylor has only been in her new position a couple of weeks, but she has been employed at the port since January 1, 2014 as a CPA.

It is thought by some that she also may be the first Orange County native to ever hold the position. Taylor was not able to confirm, nor deny the possibility.

“There have been at least four Port Directors before me, but there is a gap of about four years where a couple of people either served as interims and/or port directors. I am really not sure,” said Taylor, Monday. “I am either the fifth Port Director or could possibly be higher depending on what happened in the four year gap.”

The Enabling Act that brought the Port of Orange into existence was in 1953.

“We had some records that were lost from Hurricane Ike and I think this file could have been one of the files that were in the bottom drawer of the file cabinet that got wet.”

She did confirm that at least three of the four earlier directors were not from Orange County. It can be safely said she is the first Orange Countian in the position in at least 50 years.

“We are proud to live in Orange County and be a part of this community,” said Taylor. “Both of our families are also here.”

Taylor has lived in Bridge City all her life. She graduated from Bridge City High School, is a proud Lamar graduate and married her high school sweetheart, Claude in 1995. They celebrated their 24th anniversary Monday. They have two daughters. Ashlyn, 20, was just accepted into Lamar’s nursing program and Brianna, almost 17, is a junior at Bridge City High School.

During her senior year in college, Taylor went to work at Cavett Turner and Wyble and spent 10 years as a public accountant.

After Hurricane Rita, she spent nine years as the finance director for the City of Vidor. She also did a stint as interim city manager. When they offered her the permanent position, she turned it down, because it would have required her to live within the city limits of the City of Vidor.

“It just wasn’t a good time for my girls,” said Taylor. The stint in Vidor was very helpful to her career. “I learned a lot while I was working there as interim city manager.”

Concerning the new job, “It’s great. I already knew a lot of people in the area.” Taylor said she has attended several networking events to meet other people in Orange County she didn’t know.

Her main job duties include attracting potential tenants or clients to come to Orange, develop policy and procedures and oversee lease agreements.

She said the Port of Orange tenants employee over 200 people in the area. Sienna Marine and Bloodworth Marine do barge repair. The port also has dry docks in close proximity to Westport Marine and Orange Shipbuilding. 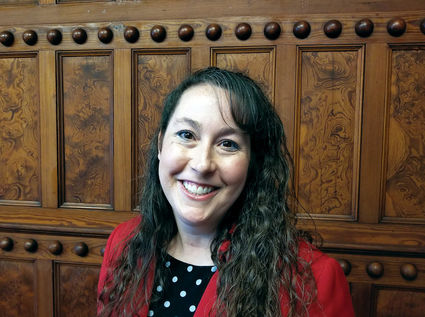 They have land, warehouses and docks available at an inland port on the Sabine River. It is an industrial port less than two miles from Interstate 10 and is on the Intercoastal Waterway. It is an inland river port with a shallow draft that caters to barges and inland river vessels. They also offer long term layberth options that may not be available at other ports.

“We are near capacity right now, but that fluctuates,” said Taylor. “It varies with oil prices or repair work that needs to be done.” She said the Port of Orange also owns other land and warehouses in the area that do not have water access available to lease.

She is excited about the new position and just wants to be a good role model for her girls and family.

“I want to show them that hard work and perseverance pays off.”