Photo: Experimental aircraft were among the 40-odd private planes on display Saturday, April 27, at the Orange County Airport Fly-In.

More than 900 people came out to see about 40 mostly-private airplanes come and go to the Highway 87 air strip that is winding up its first year under county operation.

“We were awed by the turnout,” Missy Pillsbury, airport manager, said. “We had no idea the public turnout would be like that, at all.”

A pair of helicopters taking off from Orange County Airport Saturday, April 27 attracted a crowd of onlookers during the first annual Fly-In.

Private planes and a couple of helicopters from as far away as Florida stopped in. One copter belonged to Orange’s Phillip Hollis, the other to the Jefferson County Sheriff’s Office.

Among the aircraft were a World War II era Beechcraft Model A-45 and ultra-lights from the Experimental Aircraft Association.

The Young Eagles of Leesville, Louisiana, a program to introduce and inspire kids to take an interest in aviation, offered free rides in single engine planes to about two dozen teenagers.

“It was very successful,” Commissioner John Gothia said. “Missy and our local pilots put a lot of work into it.

“We sold a lot of [aviation] fuel and a lot of people got to see the airport that hadn’t seen it before.”

“People asked us, ‘Are you going to do this annually? Please do. We liked it,’” Pillsbury said.

“We’re trying to do it annually – at least.”

A team of volunteers helped the county airport put the event on.

“It probably took us seven to eight months to plan it, but we wanted to do something since Orange County had taken over the airport.

“It was just unbelievable, that wow factor. We are very thankful for everybody that came. Everybody had a great time.”

The county gave a big thank-you to Boy Scouts Troop 220.

“They were fabulous,” Pillsbury said. “They came and volunteered, helped with trash, helped with traffic, they were an awesome group of boys. Really, we didn’t have the manpower without them.”

Orange County began acquiring the airport from the Brown family in 1973, the airport manager said. Until last fall, it had been operated by a subcontractor.

“After the first few months, operations increased 67 percent over 2018 and fuel sales had increased like 61 percent,” Pillsbury said.

In other action Tuesday, Commissioner Theresa Beauchamp announced that Monday had been set as a tentative start day for work on the Orange County courthouse marble restoration work.

McEntee will be at the Orange County Convention and Expo Center both Tuesday, May 14 and Wednesday, May 15 from 5:30 p.m. to 6:30 p.m. to provide information and get input regarding park improvements.

“This is not a typical grant deal,” Trahan said. “The understanding is she’ll do the design work and once NPS puts its stamp on it, it puts us at the front of the line to get some of these grants.”

The county has also been working with FEMA regarding mitigation grants for replacing much parks infrastructure lost to Hurricane Harvey in 2017. 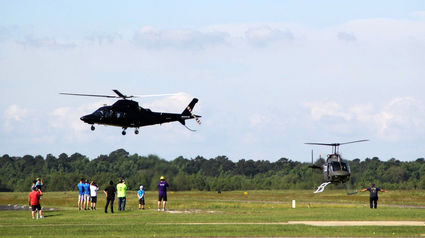 “What we receive from that National Park Service will be a proposal that we can begin to solicit for grants from specific services. This comes with no grants, but it will be a big help.”

At Tuesday’s meeting, commissioners paid $274,251 in weekly bills plus passed on $115,000 collected in quarterly court costs and fees to the state of Texas.