Challengers Mary McKenna and Caroline Mazzola Hennigan earned more votes than the incumbents they ran against for a seat on the Orange Council.

But the results of Saturday’s city and school district elections left both McKenna and Hennigan shy of the 50 percent plus one votes they needed to avoid a June runoff election.

In the election drawing the biggest turnout in Orange County, opponents of a proposed $46.1 million bond election by the Bridge City school district won by a 2-1 majority, getting 1,604 of the 2,340 votes cast (68.5 percent.)

McKenna, the general manager of Golden Triangle Hospice in Orange who knocked incumbent District 4 representative Annette Pernell out of office in 2013 only to lose it back to Pernell in 2016, came within three votes of winning Saturday’s election outright.

Hennigan, special education coordinator at Little Cypress-Mauriceville schools, drew 402 of the 1,022 votes (39.3 percent) cast in a race open to all eligible city of Orange voters.

Five candidates ran for three at-large seats on the West Orange-Cove school board, with each voter allowed three votes and the top three vote-getters being seated. 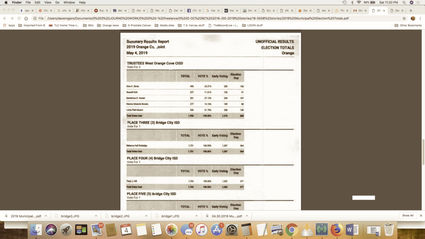 In the City of West Orange, incumbent Randy Branch topped all three candidates for two at-large positions, and machinist Brent Dearing won the other spot. Vote counts were 122 for Branch, 94 for Dearing and 59 for Patty Cook.

Cathy Nagel was re-elected as mayor of Pine Forest, 43-16 over challenger Brian Elliott.