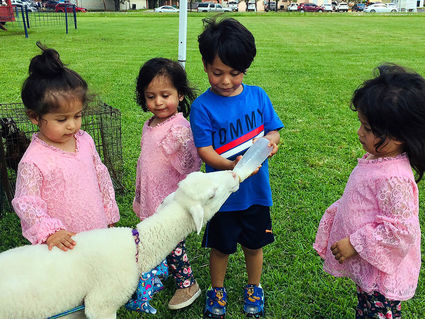 Hundreds rallied around a city landmark last weekend to celebrate the third sure-to-be-annual Depot Day at the Orange 1902 Train Depot.

The theme was “Talent Under The Big Tent” and there was plenty of entertainment both under and outside a roof.

“This was by far the best we’ve had,” said Rose Simar of the non-profit Friends of the Depot.

“We had at least 400 people come out. The children absolutely loved it because of the things we had, and of course, the Orange Community Players were performing under a tent.

“We got a lot of pleasure out of seeing the kids have a good time. We definitely plan on doing it yearly.”

Leisha Courville’s Feather and Fur petting zoo and Blasia Hornsby’s Party Ponies were big hits with the young-uns and their young-adult parents.

Besides the OCP, which had both adult and teenager groups singing, dancing and otherwise performing, the Southeast Texas Model Railroad Club, food and craft vendors were available in and around the Green Ave. depot.

“Every year we try to do something different to see what works,” explained Carrie Woliver, who led the effort to renovate the train station that served Orange from the turn of the 20th Century until the mid-1970s.

“Obviously the animals have worked. And the balloon man, wow. OCP, they do it every year.”

Simar said the “balloon twister” was coming off a three-year tenure at Disney World, saying both that artist and the provider of the trackless train ride, both hailed from Houston.

Depot Day was a one-year experiment when it was held before Tropical Storm Harvey devastated much of the county in 2017. This was the second year in a row since the storm.

Weather -- wouldn’t you know it? -- was the only sticking point this time. Although it didn’t rain during the event, the grounds were damp and the forecast dim.

“We kept looking at the forecasts,” Woliver said. “So far they were good for us.”

Because of the threat of rain, many of the food and crafts vendors were moved from an expected spot in the lawn in front of the depot to a spot under the roof’s overhang at the back of the depot.

“This year, we opened it up to merchandize vendors, whatever,” Simar said. “We were really afraid the ground was too soppy wet, so we made a place for them behind the depot.”

One new addition did not work, Simar said. That was a split-the-pot bingo game. First the caller called-in unavailable. But it turned out to not be that big a deal.

“The only thing that did not happen was we did not have split the pot bingo.

“But we realized that people came out there with their children and grand children, not to play bingo. We know we’ve got quite a few people who love that bingo.

“We think we’ll have events like that coming up sometimes.”

Simar sees Depot Day as being an opportunity for folks who have not been inside the renovated building to bring their families and explore. She said she received many positive comments from first-timers Saturday.

The Friends of the Depot are having no trouble renting the facility for weekend meetings and family events.

But Simar and Woliver both stressed museum exhibits are still being planned to be included in the depot. Meetings are set later this month to hear ideas.