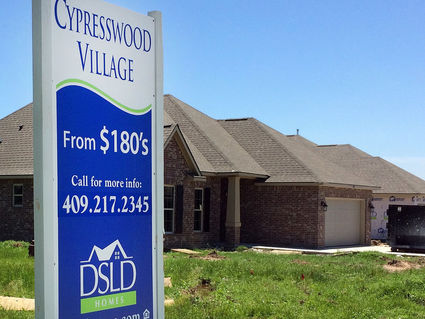 Photo: An infrastructure grant of $350,000 by the City of Orange Economic Development Corporation will aid the construction of 40 new homes in the Cypresswood Village Phase II project in the Bridge City school district. RECORD PHOTO: Dave Rogers

All present for the twice-monthly meeting voted unanimously Tuesday for a resolution approving a grant of up to $350,000 for infrastructure for 40 new homes to be built in Bridge City school district, off Texas 87 just north of FM 105.

The grant, which developer ITEX seeks for drainage ditch and storm drain improvements for its Cypresswood Village Phase II, is being offered by the city of Orange’s Economic Development Corporation.

“We really don’t have enough housing and we haven’t had any new additions in a long time,” council woman Terrie Salter said.

“Orange needs to grow. We need it.”

Tuesday was the resolution’s first reading.

According to figures provided in the grant application by ITEX, the developer plans to spend $1.7 million on the project. The bulk of the expense – nearly $1 million -- will be for water, sewer and drainage.

A first reading on a resolution authorizing an EDC grant of $55,000 for Real Southern Cooking had to be delayed because of a recusal by Salter, due to a conflict.

They also approved a change in a $30,000 hotel/motel occupancy tax expenditure for the Greater Orange Area Chamber of Commerce.

The tourney is expected to bring in 200 teams to fish the event.

Both Julie Rogers Gift of Life and Southeast Texas Hospice were awarded $5,000.

City Council proclaimed Tuesday Fire Chief David E. Frenzel Day for his 50 years of service to the Orange Fire Department; and proclaimed this to be National Salvation Army Week.