Joel Ardoin has proved himself as soothsayer.

Now the Orange County Emergency Manager is set to earn his water wings.

Ardoin’s department successfully won a $87,000 Rebuild Texas Fund Hurricane Harvey grant to purchase and 18-foot airboat and trailer. He is one of five Emergency Management Department and Sheriff’s Office employees soon to undergo the training necessary to be certified as captain for the new airboat.

“The particular grant this year was set for response vehicles, whether it was high water vehicles, boats, etc.,” Ardoin explained.

“The Sheriff’s Office has an airboat of its own but after speaking with the sheriff, we agreed we could use more than one sometimes.”

After Harvey’s record rainfall in August 2017, flood victims were rescued from high waters by all manner of private boats. Airboats, like many brought from the Cajun Navy, proved very handy.

“We’re surrounded by water on three sides with a lot of marsh,” Airdoin said. “And besides floods, the sheriff and I discussed that in the event of an aircraft that went down in the vicinity of Orange, we only have one airboat that could respond initially.”

Ardoin asked for – and received – permission to apply for the grant from the Orange County Commissioners’ Court on Feb. 19 this year.

Four days later, a large cargo plane crashed in nearby Chambers County, killing all three aboard and spreading debris all over the mud flats of Trinity Bay. The search for bodies and the so-called “black boxes.”

“Eventually, the state will kick in assets,” Ardoin said, “but not at first.”

Almost as eerie as Ardoin mentioning a plane crash days before a nearby one happened, was the way the Orange County request beat the funding odds.

The county’s bid was one of only 33 granted.

Along with the monies for the airboat, County Auditor Pennee Schmitt placed, at the commissioners’ direction, a FEMA check for $1.3 million into a special budget to reimburse the county for money spent for debris removal.

Tax Assessor-Collector Karen Fisher reported the county had received $111,301 in April property tax collections, and that 95.15 percent of the total 2018 property tax monies due had been received.

Commissioners renewed a one-year agreement with the Port of Orange to use its Navy Barracks to house volunteers helping rebuild homes still not repaired after Harvey.

Tubbleville said while out-of-town church volunteers are often housed by local churches, groups of more than 70 will be staying, rent-free, at the barracks between May and November.

On the same topic, Tubbleville invited the public to attend a 1 p.m. Friday open house at 2013 Thousand Oaks in Orange. Representatives from Orange County Disaster Rebuild, Nehemiah’s Vision, United Way, Catholic Charities, Salvation Army and American Red Cross will host the celebration with homeowner Gloria Neville of the completion of her rebuilt home.

She is here this week touring county parks and will hold the second of two meetings with the public at 5:30 p.m. Wednesday, May 15 at the County Convention and Expo Center. 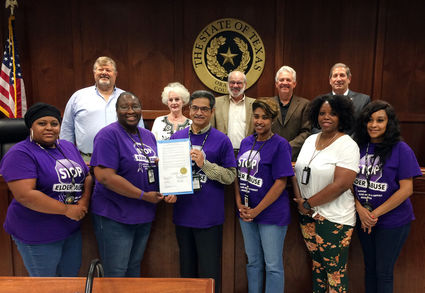 He said that while some flood insurance checks were available to fix buildings – about $100,000 for the Precinct 2 Commissioner’s office, for instance – that the projects have been on hold waiting for FEMA’s commitment to reimburse the county for raising the buildings’ elevation.

Guidry told the commissioners they needed to decide if they wanted their buildings sooner at the county’s expense, or later at FEMA’s.

At the county’s monthly Wednesday meeting, commissioners paid $204,000 in weekly bills and authorized the Management Information System Department to spend $18,400 for an update of the county’s website and $300 per month for web-hosting and support.