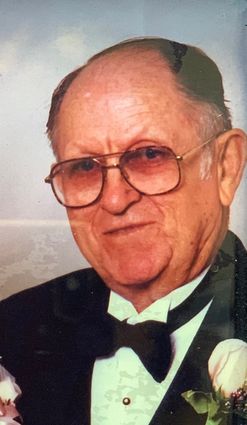 Howard served in WWII in the Army Air Corps with two tours of duty in Germany during the Berlin Airlift. During his career as a working man he worked for the telephone company, vending machine business, a professional truck driver, and retired in Nederland, Texas as a sales representative for Affiliated Foods and McClain Distribution.

Howard was well known as a compassionate, tender hearted gentleman who had faith in God. He loved the outdoors, especially fishing and enjoyed listening to country music. Howard was a people person and never met a stranger. He would strike up a conversation at the drop of a hat. He took on a big job when he married Arlene and had an immediate family of children ranging in age from 1 to 7. They all grew up to have successful lives due to his guidance and love only a father can give.

He is survived by his children, Donald and wife Gladys, Dorothy Hudson, and Harold Thompson; grandchildren, Richard Arlen, Brian Stewart, Russell, Jennifer and Leslie; and 5 great-grandchildren.

A graveside service will be held at 10:00 a.m., Friday, May 17, 2019, at Orange Forest Lawn Cemetery in West Orange, Texas. Officiating will be Reverend David Millner, of Calvary Baptist Church in West Orange.