Consultant updates BC on Harvey funds 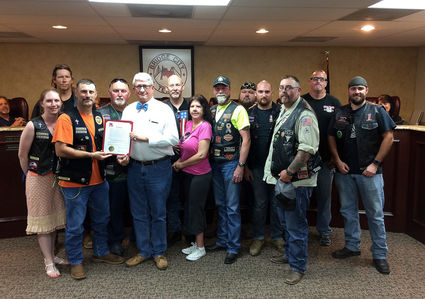 Photo: Bridge City Mayor David Rutledge presents a proclamation declaring May as “Motorcycle Safety and Awareness Month” Tuesday night in City Council chambers. Members of the Texas Elite Bikers, Maverick Motorcycle Club, Prodigal Motorcycle Club and COC and I were on hand for the presentation.

While Bridge City waits to hear good news from the General Land Office, officials are doing everything to be ready when it comes.

As part of a $5 billion Hurricane Harvey federal grant to Texas announced nearly a year ago from the Department of Housing and Urban Development, Bridge City was allocated $2.034 million for infrastructure and $1.566 million for the acquisition.

Typically, HUD money comes with a requirement that 70 percent be spent on low-to-moderate income neighborhoods.

“The city has a request in to the GLO to waive the LMI requirement,” said Melinda Smith, vice president for Traylor & Associates of Tyler, the city’s grant administrator.

“The last I heard, that had been forwarded to the Governor’s office. We’ve been told to move forward as if the LMI has been waived.”

Jerry Jones, city manager, said the bulk of the infrastructure money will be spent on a new water well.

Saltwater intrusion in the so-called “Romero well” caused it to be abandoned, he said. A new city well will be driled at Sunnyside.

Jones said the city had received 22 applications from homeowners who wanted to take a payout and abandon their oft-flooded property.

“Some of those are not going to be eligible, because rental property is not eligible,” Jones said. “And if we have to to 70-30, others won’t be eligible.

“But a few of the properties we’re looking at are houses that flood repeatedly.”

The city had a choice between two GLO plans: “buyout” and “acquisition.”

The first would purchase oft-flooded properties and the land would be forever taken off the tax rolls. The latter, which the council chose last year, requires the city to demo existing structures but the land can be resold. Homes can only be built on the land if properly elevated above the flood plain.

“Until we get down to the final declaration of what they’re going to let us do, we’re not going to have details,” Jones said.

But Traylor’s Smith is encouraged.

“This gets the process rolling at GLO,” she said of a Tuesday night go-ahead vote by council. “This is very preliminary, but it gets the money flowing and people out of harm’s way.

“Unfortunately, I don’t think we’ll have it before the next hurricane season [this year’s] is over.”

In other news, Jones said the city had been busy working to clean ditches and hoped to coordinate with the Orange County Drainage District and Orange County Road and Bridge department on the issue.

He said funding was available for 14 storm drainage boxes and three manholes, but other street projects are on hold pending state and federal OKs.

Mayor David Rutledge had a warning about state funding:

“The Legislature is its last official week, so hang on to your hat,” he told the audience. “This is the week when all the bad stuff slides through. It’s not looking good.”

People still not back together after Harvey’s flooding in 2017 may be eligible for help by SVDP Disaster Services.

They are especially looking for veterans who enlisted after 9/11 who still have housing needs. For more information, call 409-658-8781.