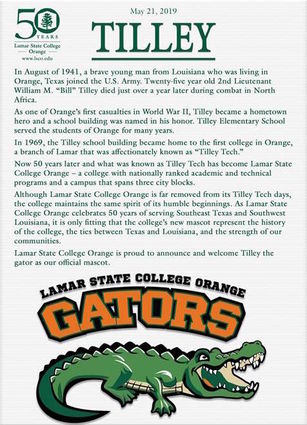 In August of 1941, a brave young man from Louisiana who was living in Orange, Texas joined the U.S. Army. Twenty-five year old 2nd Lieutenant William M. "Bill" Tilley died just over a year later during combat in North Africa.

As one of Orange's first casualties in World War II, Tilley became a hometown hero and a school building was named in his honor. Tilley elementary School served the students of Orange for many years.

In 1969, the Tilley school building became home tot he first college in Orange, a branch of Lamar that was affectionately known as "Tilley Tech." 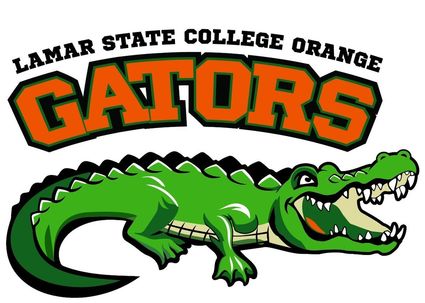 Now 50 years later and what was known as Tilley Tech has become Lamar State College Orange - a college with nationally ranked academic and technical programs and a campus that spans three city blocks.

Although Lamar State College Orange is far removed from its Tilley Tech days, the college maintains the same spirit of its humble beginnings. As Lamar Sate College Orange celebrates 50 years of serving Southeast Texas and Southwest Louisiana, it is only fitting that the college's new mascot represent the history of the college, the ties between Texas and Louisiana, and the strength of our communities.

Lamar State College Orange is proud to announce and welcome Tilley the gator as our official mascot.