Photo: Gloria Neville settles into her North Orange home recently rebuilt and remodeled by volunteers after it was flooded by Tropical Storm Harvey.

Nearly a year and a half after Tropical Storm Harvey drenched Southeast Texas, Orange’s Gloria Neville was still living with family members in Louisiana.

Her north Orange home had been cleared to the studs but a storm-chasing contractor took her FEMA funds and headed for the hills.

Fast forward four months and Neville was back in the home of her dreams – hers. And, thanks to a network of helpers, it is better than ever.

“For quite some time, it seemed like things weren’t going to happen. But this is beautiful.”

Nehemiah’s Vision, a faith-based non-profit out of Vidor that was created to rebuild homes after Hurricane Rita in 2005 and de-activated after cleanup from 2008’s Hurricane Ike, has been busy since Harvey hit in 2017.

They are currently working on 14 more homes, she said.

“We use volunteers from all over the country. We let other organizations, other churches know we’re up and running. Volunteers come,” Reid said.

Help for Neville, like others, comes from numerous Orange County agencies.

It was at an event hosted by Orange County Disaster Rebuild that Neville first found out about Nehemiah’s Vision. United Way Orange County, the American Red Cross of Southeast and Deep East Texas, along with the Salvation Army and Catholic Charities were others who assisted in getting Neville back in her Orange home.

A total of seven teams of workers, a combined 47 volunteers, worked 2,000 hours to put Neville’s home back together again. 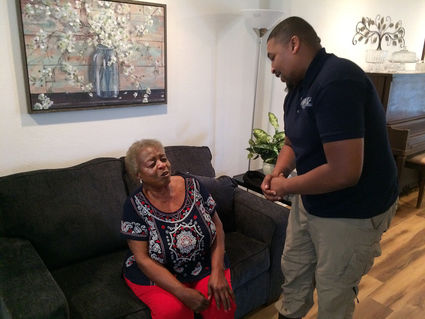 Volunteers came from as far away as New Mexico and North Carolina.

Besides the rebuild, the organizations refurnished the home, providing new appliances, new furniture, new foodstuffs for the pantry and a new appreciation for her hometown.

“It’s hard to say who Nehemiah is,” Neville said. “First, it’s one person, then it leads to another and another and poof, it’s like we have here.

“All the other organizations really helped. My neighbors were available and they were here at any call. This is beautiful.”