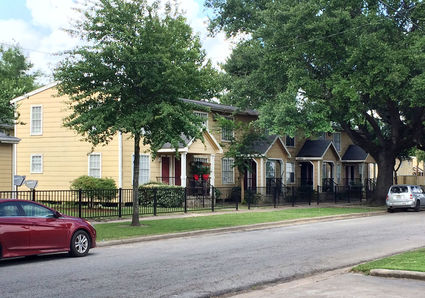 A new owner could receive up to $200,000 in city reimbursement on a $1.3 million renovation of the newly renamed Downtown Orange Apartments across from the Orange Boat Ramp. RECORD PHOTO: Dave Rogers

The “deciders” at Chevron Phillips Chemical could decide as soon as next spring to place a new $6 billion ethylene plant in Orange County.

So said Chaney Moore, the company’s Woodlands-based real estate and property tax manager after taking part in a pair of half-hour visits Tuesday evening with each the City of Orange’s Economic Development Corporation and City Council.

Both were executive sessions closed to the public. No action was taken after either session.

Moore said Chevron Phillips Chemical wants the city to disannex the portion of the land it wants to locate on that lies within city limits.

Most of the 1,700-acre property that the energy giant has zeroed in on is in Orange County’s unincorporated area, he said.

“You can’t ask a county to create a reinvestment zone for a portion that’s in the city,” he said. “And that’s why we’re here tonight.”

So after agreeing to an in-lieu-of-taxes payment with the city, the plant, if it lands here, would fall under the county’s taxing authority.

And a reinvestment zone is needed to get the tax abatement the company will seek from Orange County.

“We haven’t even applied for a tax abatement with the county because we can’t yet,” Moore said. “So, until we’re through this step, we haven’t even started that process.”

The proposed plant, to be located between FM 1006 and Texas 87, across from the existing Chemical Row plants, will employ “over 300 full-time CP Chem employees and over 200 full-time contractors,” Moore said.

Moore said the timetable remains the same as when the project was introduced to the West Orange-Cove and Bridge City school districts last winter.

It calls for construction beginning in 2020 with plant operations beginning 2024.

The Orange EDC and council gave its early approval to another good-sized project. Members agreed to start a 60-day clock on final OK of a proposal to use EDC funds “not to exceed $200,000” to help reimburse improvements being made by new owners to the old Sabine Park Apartments across from the Orange Boat Ramp.

Bodin Properties of New Orleans bought the 200-unit property in the last two months and began this week a $1.3 million capital improvement project.

The name for the low-income tax credit property will be the Downtown Orange Apartments.

Currently about 70 of the units are vacant, said company rep Blake Miller. He said there is no intent to raise rent.

“We want to fill it up. Our goal is 95 percent occupancy,” Miller said. “It’s kind of been an eyesore. It had so many trees, grass couldn’t grow and that became mudfields.

“But we’re moving and grooving. It’s starting to come together with tree trimming and we plan to put in landscaping. We want to give the community a place that’s safe and attractive.”

In addition to tree trimming, the company has already begun putting new roofs on the two-story buildings and painters were covering up the old mustard-colored paint job with a more neutral grey-green.

It plans to install air conditioning and is using a mix of local and non-local workers to do the job.

The money from the city, Jay Trahan, city economic development director, said, will only be paid after the work is complete.

A deal was finalized with Cypresswood Village LLC for an EDC infrastructure grant “not to exceed $350,000” to go toward adding 40 new homesites at the addition bounded by Texas 87 and FM 105.

A resolution approving an EDC infrastructure agreement “not to exceed $55,000” for Real Southern Cooking, 1111 Green Ave. passed on first reading with council members Bill Mello and Terrie Salter recusing themselves because of conflicts.

Salter, Annette Pernell and Patrick Pullen recused themselves from voting on a new hotel occupancy tax funding request “not to exceed $20,150” for a three-day Juneteenth event at the Riverfront Pavilion.

The request was OK’d, though, by a 4-0 vote by the other council members.

The council met in a closed session at the end of Tuesday night’s meeting to hear a presentation regarding the search for a new city manager put forth by the headhunting firm of SGR. No action was taken.