Aaron Pollock was among the hundreds attending Sunday’s Tribute to Orange County Veterans at the Heritage Veterans Memorial Plaza – his 10th year in a row to attend.

The Memorial Day weekend event at Orange’s First Church of the Nazarene honored all veterans of America’s armed services.

But as the holiday was originally intended, special emphasis was given to those who gave the greatest sacrifice, those who did not come home from war.

Pollock, a 1998 graduate of Little Cypress-Mauriceville who spent 16 months deployed “in country” during the Iraq War, comes to the Heritage Veterans Memorial Plaza twice a year to honor a brother in arms who died beside him.

“Rob was a lieutenant when we first met in 2003,” said Pollock, who was assigned to the 2nd Battalion of the 1st Armor Division in Baghdad.

“As our missions progressed, it always seemed we found each other at the right time and the right place.”

One day in mid-May 2004, at what was believed to be the end of another successful mission south of Baghdad, a “close rocket attack” confirmed a new enemy presence.

Pollock said his team choppered back to base while Rob’s team was tasked to find out the point of origin of the rockets.

“We left to fly back to Baghdad, a 45-minute trip. When we landed, a division chaplain met us and told us Rob’s [HumVee] driver had hit [an IED] a thousand-pound bomb.”

The driver died immediately. But Scheetz was hanging on to life. Pollock’s helicopter was redirected to bring the wounded captain back to the base hospital.

“He was stable, but after a couple of days, he was to be transferred to the hospital in Germany so he could get better care,” Pollock said.

“While we were escorting him to the airfield, he told me wasn’t going to make it. He told me I needed to go back home and finish college.

“Then he died right there, on the runway.”

“One thing in the Army, you don’t get a lot of closure,” Pollock said. “We don’t fly home to bury our brothers. They go home to their families.”

In late 2004, Pollock’s overseas tour ended and on a leave back home, “my mom told me about this place,” he said, meaning the memorial plaza in Orange.

“And it just hit me, that on the day they were dedicating this memorial, May 30, 2004, that Rob was on the other side of the world and died.

“When things weren’t going well for me, I always had this connection. This was home.”

Pollock stayed in the Army until retiring in 2010.

“I managed to come a few times before [leaving the service] but I’ve been here every year since retiring.”

Pollock who now works as a baseball and football coach at Hardin-Jefferson revealed he comes to the monument normally twice a year.

And members of the church noticed. Misty Bornholdt-Winder of the Memorial Plaza Committee saw to it that Scheetz’s name was ingraved on one of the many plaques at the plaza. 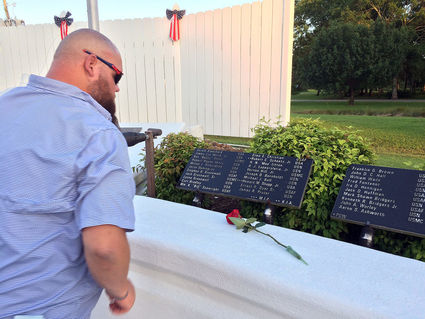 “I come to Orange on Sunday [for the Orange County tribute], then I come back on May 30 [the anniversary of Scheetz’s death],” Pollock said.

“Rob and I first met in Germany and during our whole deployment together, we joked about going home and having kids and starting a baseball team together.

“Unfortunately, Rob didn’t get to make it back. Everything, I do now I do it for Rob.

“I went back to college and finished my degree. That’s where I met my wife. And we come back here every year.”