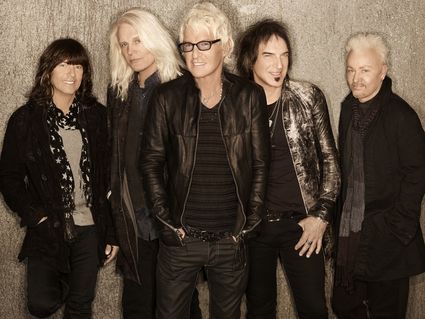 Courtesy photo Legendary rock act REO Speedwagon returns to Southwest Louisiana on Friday, June 14, for a performance inside the Grand Event Center of the Golden Nugget Casino in Lake Charles, La. Tickets are $55-$85 each for ages 21 and older.

One of the most popular bands of the 20th century is headed back to Southwest Louisiana to help heat up the summer music circuit.

REO Speedwagon will perform on the stage of the Grand Event Center at the Golden Nugget Casino in Lake Charles, La., at 8:30 p.m., Friday, June 14. Tickets are $55-$85 each and available online at http://www.goldennuggetlc.com for ages 21 and older. The doors open at 7:30 p.m.

REO Speedwagon has been a musical force for the better part of five decades as the group released its self-titled debut in 1971. However, it was the group’s 1980 release “Hi Infidelity” that solidified the band’s status as rock icons as the album has sold more than 13 million copies to date and features the hit song “Take It on the Run” and the number one smash single “Keep On Loving You.”

The group, which is comprised of founding member Neal Doughty, keyboards; Kevin Cronin, vocals and guitar; Dave Amato, guitar; Bryan Hitt, drums; and Bruce Hall, bass. REO Speedwagon has regularly toured nearly every summer for the past decade with bands such as Styx, Def Leppard, Chicago, Cheap Trick and more, but the group always finds a way to keep things entertaining for its fans.

“It is definitely a challenge to make each tour a bit different from previous tours,” Hall said in a telephone interview. “There are certain songs we have to play and that takes up almost all of the time we have allotted, but there are a couple of songs we have been doing that fans might really enjoy hearing.”

The band has not released any new material since 2007, but fans are always wanting to know if anything knew is on the horizon, according to Hall.

“We actually write and record still, but we don’t know what to do with the songs,” he said with a laugh. “There’s just no where for bands like us to be heard anymore, as most radio stations aren’t interested in playing anything new from bands like us. But just because that is the way things are right now doesn’t mean you have to stop being creative. It’s what makes us who we are as musicians and a band.”

In previous years, REO Speedwagon has hit the summer tour trail as co-headliners with friends and peers such as Def Leppard in 2016, Styx in 2017, and Chicago in 2018 but will be enjoying most dates this summer as the main attraction, which, as Hall said, has its benefits.

“The main thing about us headlining our own shows is that we get to play longer sets and play more songs, and that’s great for the fans,” Hall explained. “We do enjoy touring with all of those other bands too, so there’s a positive way to look at it from each side.

“Back in the day, we used to be in competition with a lot of those guys,” Hall continued. “But as time went by we found out we all get along really well and have fun, so, when we tour together, it’s like a big reunion because we’re all friends and enjoy each others music.”

The band’s current lineup has been together for more than 30 years, and that means the men in REO Speedwagon have performed thousands of shows together at this point and it is still something they all enjoy.

“If the people stop coming to our shows, then we might decide to stay home,” Hall said laughing. “But we all still feel very fortunate to be doing what we do, and we do it because we love it. I hope we keep doing it for many more years. It’s been a fun, fun, fun life, and, as great as our fans are, I think we still have some more tours left to do.”