Getting lit with Henry Lowe at the Orange African American Museum 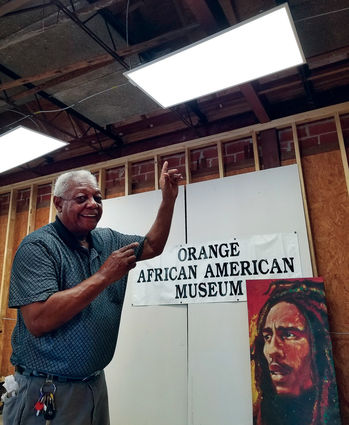 Picture: Henry Lowe, founder of the Orange African American Museum shows off the newly installed lights in the building being renovated to the house the museum exhibits. RECORD PHOTO: Penny LeLeux

Yes, things are getting lit at the museum, literally!

It’s been a long journey since Henry Lowe first had the idea to open the Orange African American Museum (OAAM). There is still a ways to go down the road, but the path is getting more defined and there is now light streaming into the forest.

Lowe is happy to announce they now have lights at the museum. He had hoped to have the museum open to the public a year or two ago, but Harvey but a dent in those plans.

It was October in 2012 when he first gathered a group of interested people at Joe Ware Plaza to discuss the possibility for starting a museum. Some of those in attendance at that first meeting were former Orange mayor Essie Bellfield, retired school teacher Evera Enard, current Orange city council woman Annette Pernell and several others.

“We met at Joe Ware (Plaza) and talked about preserving our history.” Lowe said. “We thought it would be a good idea. Joe thought so to.” Lowe said Ware had indicated if he sold the building or got rid of it, he would like for them to have it. Ultimately the building became a church, so Lowe was on to plan B, which came in the form of a building the county had claimed for taxes and put up for sale. Donations were made that allowed Lowe to acquire the building from the county a few years ago.

Jack Elliot has been very helpful said Lowe. “Jack sat down and did a complete itemized drawing of the entire project.” His estimate was $101,000, so that is what they set as their target. They held fundraisers and donation drives, then Harvey hit.

“Things (donations) dried up after the storm and I can understand that. So many people were affected.”

Mary Lazarus, of Orange, told Lowe, “I love to cook and I love to raise money,” so she starting doing some fundraising through lunches. That was how they were able to furnish temporary electricity until the inside could get framed up and the new wiring and lights could be installed.

Last year, the Velma Jeter Foundation dissolved and they donated half of their funds totaling $12,500 to the museum. That allowed the committee to move forward with framing and having lights installed

“I’m so glad we have got the lighting in there,” said Lowe. The next step is to get the building climatized and update the plumbing.

“The next big ticket item is the plumbing situation.” Lowe said besides updating the plumbing, ladies are insisting on having two restrooms in the building, but the square footage of the building might preclude that possibility. The museum owns the adjoining lot, but could be limited on an expansion to the building.

“We are in the historical district, so we will have to consult with them when we do things on the outside,” said Lowe.

Owning the additional property does give them some room for outdoor events in the future.

“If all goes well and we get to the point of climate control in the building, we’ll be very close to becoming operational.”

He said the Stark Museum of Art has offered to assist OAAM with education on artifact preservation. “They have offered us all the experts in the different fields of photographs, displays and such. They have offered to teach our volunteers how to do these things.”

There is still a ways to go and more funds to raise, but Lowe can finally see the light.