Photo: Orangefield native Stanley Simon, 97, was a staff sergeant with an anti-aircraft artillery battery that landed on Omaha Beach during the D-Day Invasion in France, 75 years ago, June 6, 1944. RECORD PHOTO: Dave Rogers

The surf ran crimson with blood as U.S. Army Staff Sgt. Stanley Simon landed on Omaha Beach with his artillery battery in the Allies’ D-Day Invasion of France.

The 75th anniversary of history’s largest amphibious attack and one of the deadliest battles in American history is Thursday.

A native of Orangefield, the 97-year-old Simon will watch the commemoration ceremonies from Normandy on television from his Beaumont senior living center apartment with his wife of 72 years, Port Arthur native Gladys Theriot.

The D-Day landing which began at dawn June 6, 1944 pushed 150,000 soldiers from the U.S., Canada and Great Britain into a hail of Nazi gunfire from heavily fortified cliffs.

More than 3,000 Americans died the first day of the brutal assault.

But its success established for the first time during World War II a U.S. infantry stronghold in France, which allowed the Allies to push the Germans out of Western Europe.

The Battle of the Bulge, which did much to finish them off, followed later that winter.

“We did all right,” Simon said Tuesday.

Simon was there the whole way, and suffered first frostbite, then a wound from shrapnel at the Battle of the Bulge that left him with blurred vision and permanent hearing loss.

“It was a German 88 [millimeter artillery piece],” he said.

But first he had to get off the beach.

“The Germans were waiting for us,” he said.

Simon was assigned to a truck towing an anti-aircraft gun. It was hit leaving the beach and caught fire. But he and one of his men got the fire out.

They helped protect the soldiers on the ground as they liberated France.

“They were fine people,” Simon said of the French people who greeted the Army men. “Boy, I mean. I guarantee they were excited to see us. We got rid of the Germans.”

Simon had enlisted in the Army in 1940 to help his family, that included six siblings, after both his mom and dad became ill and were unable to work.

Prior to that, at the same time he was a star football player for Orangefield High, he was working for the school, coming in early to stoke the heating fires.

Stanley’s younger brother Abe said of those Depression days, “There wasn’t always enough food to eat. After my two older brothers went off to the service, it was their allotments that helped us through times.”

After a stint in a French hospital, Stanley Simon rejoined his fellow soldiers as the war was ending. Part of that duty included rescuing Jews and others from concentration camps.

“They were starving them to death,” he said. “One place we got there just in time. They were stripping Jews and putting them in gas chambers.

“It was terrible. But we stopped that stuff.”

Simon returned home in October of 1945, but not before more memories.

He was among a group of Americans assigned to secret German caves and tunnels where the Nazis had fabricated the V-2 rockets, packing up the rockets, drawings and machinery to ship back to the U.S.

Then he came home to Southeast Texas and worked 36 years as a master machinist at Port Arthur’s Standard Brass, later known as Standard Alloy. 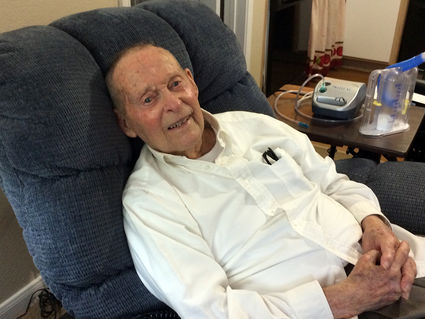 Orangefield native Stanley Simon, 97, was a staff sergeant with an anti-aircraft artillery battery that landed on Omaha Beach during the D-Day Invasion in France, 75 years ago, June 6, 1944. RECORD PHOTO: Dave Rogers