Visit Orangefield’s past at the Cormier Museum

The Orangefield Cormier Museum is set up in various business "vignettes" that represent life in Orangefield around the 1920s. RECORD PHOTOS: Penny LeLeux

Two large storage buildings located next to Orangefield High School contain a veritable treasure trove of collectables and memories of the past.

The Orangefield Cormier Museum is a step into the days of old in an oil boomtown. Paul Cormier re-created the community originally known as the Orange Oil Field. The first building is Paul’s representation of what Orangefield looked like in the 20s. It also has a lot of personal items donated from people in the community. It is an amazing display that rivals any area attractions.

Jaw dropping would be considered an understatement by many. Stretched the entire length of the building are storefront exhibits that look like main street in a quaint small town of old. Inside of each “business” is an appropriate display of collectables, tools, equipment, furniture, and memories. The outside walls of the street are covered with pictures of Orangefield’s past and the oil fields for which it is known.

Cormier left nothing out. Included in the display are a gas station, barbershop, café, soda shop, general store with post office, home, bank, dentist office and saloon, just to name a few. The second building holds a representation of the old skating rink, with original skates and floor boards included. The old high school, n i c k n a m e d “the Alamo,” is also included with some of the original bricks built into the display. In the back of the building is a collection of classic cars including the one of the original vehicles of the Cormier Well Service.

It doesn’t matter what your passion is; it’s represented somewhere in the museum.

The extensive collection of oilfield memorabilia prompted a recent visit by Doug Underwood, of Fresh Productions, co-producer of the upcoming feature film “Spindletop” that will start shooting soon in Southeast Texas.

“I enjoyed the private tour of the Orangefield Cormier Museum, which is a great resource of inspiration for Spindletop the movie and remembering the way things were,” said Underwood.

Cormier was obsessed with old toys, collecting every one he could get his hands on. The story goes; as a child, he only had one toy, and couldn’t play with it. Through the years, he accumulated a massive collection. Every toy imaginable is there.

“He did a great job of putting the displays together,” said his son, Bobby Cormier in past interviews. “Some of it obviously relates to the oil field industry, but a lot of it doesn’t,” he said. “Dad wasn’t a carpenter, so he had to rely on others to tell him what those [wood working] tools were for. Sometimes they were right, sometimes they weren’t.”

“My father always had it in his heart to do this with the first building, and then the second building; and put it all together.”

Cormier’s children, in a move to preserve his legacy to the community, donated the buildings and contents to Orangefield Independent School District about a decade ago.

A dedicated group of volunteers manage the exhibits and have added a couple of additional collections, including a display of Orangefield veterans. Peggy Granger has been one of the driving forces to put the armed forces exhibit together.

“What initially got me interested in the military project was a World War II list published by the Orangefield Progressive Paper, an early Orangefield school paper from the 1940’s,” said Granger. The list contained the men and women who graduated from OHS and served in World War II.

She said what drew Jessie Fremont to the project was his interest in past students he taught through the years that had joined our military.

“It has been an honor to visit with the many veterans who have brought their pictures and memorabilia and their stories and shared these with me,,” said Granger. “I don’t think I fully appreciated the service they had given to us, until I began working on this project. I am in awe of the great Orangefield men and women of our past and our present that have served in our military. Not a single one of them have bragged or boasted about themselves. They are always humble and dedicated.”

Granger said some families have also donated military memorabilia. She has created a Facebook page named Honoring Our Orangefield Soldiers, where she has posted the pictures donated to the museum.

The collection from the Beaumont Telephone Museum and farm equipment donated by local residents are also on display. 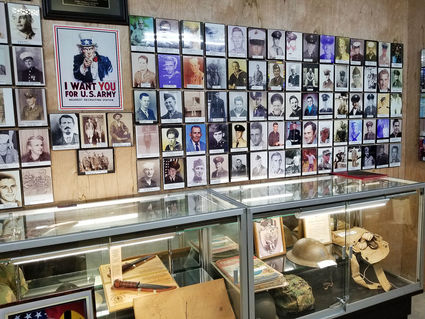 At this time, the school does not have the staff or finances to keep the museum open on a daily basis, but have opened it to the public on the third Saturday of each month from 10 a.m. to 2 p.m. and during special occasions, such as annual homecoming luncheon which is this Saturday at the Orangefield Elementary Cafeteria. For the Homecoming event, the museum with be open 9:30- 11:30 a.m. and 1-2:30 p.m., closing down briefly for lunch. If you can’t make it out to the museum this Saturday, it will be open again June 15, its regular third Saturday opening.

Arrangements can be made by appointment to view the facilities by contacting Brian Ousley at [email protected] or 409-735-2285. There are no admission fees to tour the museum. If you have a military photo to add to the collection, Granger is on the premises on Mondays from 9-11 a.m. and can scan them in on the spot.

The Orangefield Cormier Museum is located at 9974 FM 105, adjacent to the high school gymnasium and baseball field, five miles south of Interstate 10. Take the Texas 62 exit and turn right on 105 or Farm Road 1442 exit and turn left at 105.