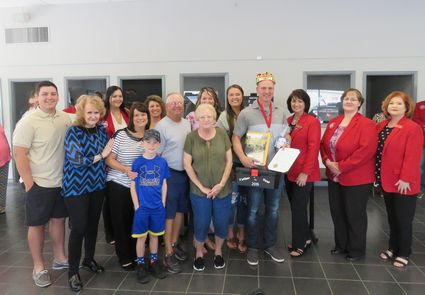 The Bridge City Chamber of Commerce held its third annual Father of the Year Contest and received several nominations, all of which were for very deserving fathers.

After careful consideration by the Father of the Year Committee, Cody Hogden was awarded the honor.

Cody was nominated by his daughter, Brooklyn, who said, “As his daughter I have NEVER known a day that he hasn’t loved me and supported me, he was my Bridge City Little League softball coach, little dribbler’s coach, cheered me on at recitals, volleyball games, basketball games, track meets, and even Taekwondo meets. I knew my Dad would always be there. My dad gave his life to Christ when I was a young girl. I vividly remember the change that took place in his life. Love God, Love People is a simple phrase that describes my dad in the most complex way.”

He used his vacation from work to bring kids to camp every summer and would organize fundraisers to ensure every single student could attend.

Cody started a non-profit organization called 20:24 Ministries so named after the scripture Acts 20:24 “However, I consider my life worth nothing to me; if only I may finish the race and complete the task the Lord Jesus has given me—the task of testifying to the Gospel of God’s grace.” Hogden also opened an outreach for high school and college students in Bridge City called The Refuge.

Immediately after Hurricane Harvey, Cody started a distribution center serving hundreds daily in our community by supplying them with necessities.

Cody has gone on numerous mission trips in the United States, China, Mexico, Middleburg South Africa, and Uganda ministering at village hospitals, orphanages and churches. In September 2018 following Hurricane Florence, Hogden coordinated with local churches and members of the community collecting supplies that filled an 18-wheeler and five 20-foot cargo trailers in five days with supplies as well as $35,000 cash delivered to Asherville, North Carolina and Myrtle Beach, South Carolina to help those in need.

Cody’s daughter Brooklyn also said, “He spends his afternoons visiting people, counseling young people and couples, and visiting elders in their homes and at hospitals.

All while doing this, he still finds time to take complete care of my family, my mom, and my grandparents.

He leads with integrity and passion in everything he does and continues to impact so many lives.” Cody works at Golden Pass LNG and serves as the Pastor of First Baptist Church Orangefield since September 2014.

He also serves on the LIT Advisory Committee for the Process Technology Department and has been speaker at Lamar State College Orange graduations and Baccalaureate for Bridge City and Orangefield High School students.

Before every home football game at Orangefield High School, he speaks an inspirational message in the locker room.