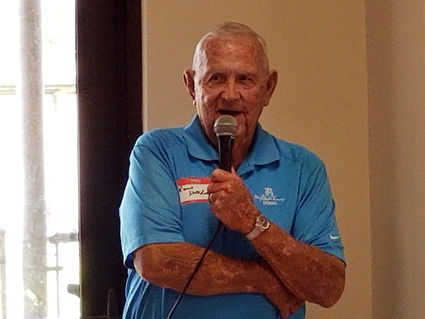 Members of the Orangefield High School Class of 1969 met over the weekend to celebrate 50 years since graduation. They coordinated their reunion to coincide with the 71st Orangefield Homecoming that is held each year on the second Saturday in June.

There were 10 in attendance Friday night at Reel Cajun, located at the Sunset Grove Country Club in Orange. Though that might seem like a low turnout, it was actually over 25 percent. There were only 49 students in the graduating class and 12 have already passed.

“We’re glad we had as many show up as we did,” said Pam Scales Honeycutt, one of the organizers. There are several they have not been able to locate or contact.

Two of those in attendance, Sammy Owens and Linda Martin Owens are high school sweethearts that have been together since their junior year.

With such a small class the pair lucked out at graduation, because alphabetically they were right next to each other.

“We got to walk together and sit together,” said Linda, remembering graduation night. “Guess there weren’t any Ns to get between us,” she laughed.

The counselor said it was just the way it worked out when others complained it wasn’t fair they got to walk the processional together. They were married about a year later, at 19.

Catching up was fun for the classmates. Most of them weren’t discussing their favorite memories from school days. “Who can remember that far back,” said Linda Owens.

They concluded Friday night’s festivities posing for a group picture with a cake.

The all class reunion had seen a decline in attendance over the last couple of years, especially last year. It had to be moved to the high school because of damage to the elementary from Hurricane Harvey. Many people were still repairing damage to their own homes last year.

This year there were over 125 in attendance. More young people showed up this year. The average age of those in attendance has been 60-80. Part of the decline is attributed to deaths or failing health.

The reunion committee always supplies the meat and drinks, while attendees bring sides and desserts. 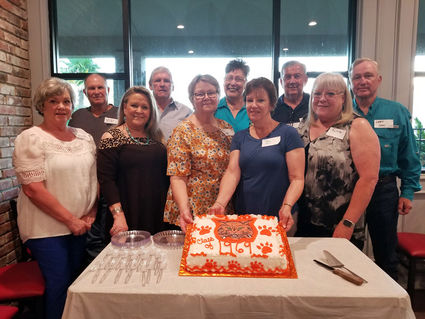 Even just taking a spoonful if each dish you wind up with more food than you can possible eat. Brisket was served with green beans, potatoes, dirty rice, corn casserole, pasta dishes, and salads of all varieties, fresh fruit and more. Desserts were even more varied with cookies and cakes, fudge, peach and blackberry cobblers, banana pudding, pastries, pies and a special decorated cake for the Class of ’69.

Former school superintendent Robert Montagne gave a welcoming address, followed by words from Mary Nixon, one of the driving forces of the reunion committee. Ronnie Hutchison blessed the food.

Many paid visits to the Orangefield Cormier Museum before coming or when leaving the event. The museum always opens for the reunion and will be open this Saturday from 10 a.m. – 2 p.m. for its regular third Saturday schedule.

“We had a good time,” said Honeycutt.