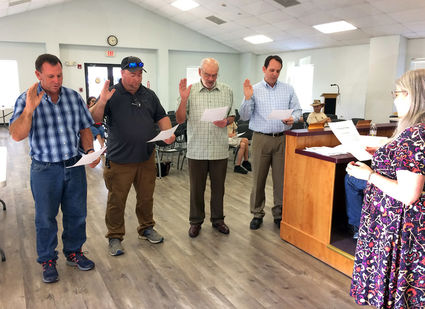 The Mayor of West Orange has endorsed a new direction for his city’s volunteer fire department.

The two men are new to West Orange, having most recently served with the Emergency Service District No. 4, out of McLewis, Roberts said.

“They are so well qualified, they’re probably overqualified,” McDonald, a former firefighter himself during his career working at DuPont.

“Yes, we solicited them.”

The fire chiefs, along with city attorney and municipal court judge are mayoral appointments in West Orange. McDonald swore the newcomers in along with holdovers Rex Peveto (city attorney) and Carl Thibodeaux (municipal judge).

Last November, McDonald had expressed unhappiness with the way things were going with the city’s volunteer fire department. He cited decreased membership and a lack of attendance, even at fires.

McDonald pushed for a merger with the Pinehurst Volunteer Fire Department, saying the city needed firefighters that could also handle medical calls.

Terry Veitch, the fire chief then, complained of a lack of communication with the mayor’s office. He said he had members who could handle medical calls but the city wouldn’t allow them.

“I have always appointed [chiefs] from within the Fire Department,” McDonald said at the start of Tuesday’s meeting, reading from a prepared statement.

“Growth within this department has been slow the past several years which has resulted in decreased attendance for drills, meetings and – regrettably – at fires.

The Fire Department roster on the city website Tuesday has only 14 members listed.

“Of course, we want to build more members,” Roberts said.

“We want to try to get into the schools and get some of the younger gentlemen there that would like to join and help until we get [grant] funding to be able to send them to fire school.

“Then, when they graduate, they’ll have a career ahead of them.”

In other action, city council opted to renew its employee’s health, vision and dental insurance coverage with the Texas Municipal League. Mike Stelly, city administrator, reported the premiums had decreased since last year.