Hennigan won 71.6 percent of the votes cast in the At-Large Place 5 race against incumbent Bill Mello, who was seeking his fifth consecutive term.

McKenna scored 67.5 percent of the vote in her run-off against two-time District 4 representative Annette Pernell.

Hennigan, a special education coordinator for Little Cypress-Mauriceville schools making her first council race led four candidates with 39.3 percent of the votes in the May 4 election while Mello actually dropped a few ticks from winning 28.7 percent of the vote in May to 28.4 percent in the run-off.

McKenna, who previously represented District 4 in 2013-2016, won 49.1 percent of the votes in a three-way race during the May 4 election, coming in three votes shy then of gaining the 50 percent and one vote majority required to avoid the run-off.

Voter turnout was expectedly light in the run-off.

Where 1,022 people voted in the city wide Place 5 At-Large race in May, less than half as many – 465 – voted during the June 3-11 early voting and June 15 election day voting combined. 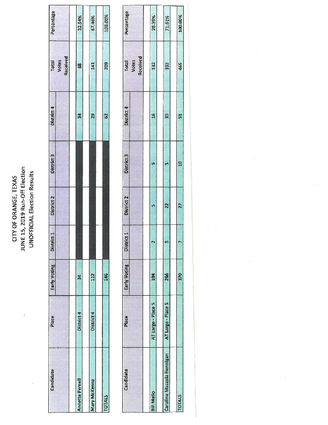 Votes will be canvassed the week of June 24-28