After scoring convincing wins over incumbents in the June 15 Orange City Council Run-off Elections, Caroline Mazzola Hennigan and Mary McKenna had different takes on the process.

Hennigan won 71.6 percent of the votes cast in the At-Large Place 5 race against incumbent Bill Mello, who was seeking his fifth consecutive term.

McKenna scored 67.5 percent of the vote in her run-off against two-time District 4 representative Annette Pernell.

Two were part of her campaign platform – improving Orange’s quality of life and bettering its drainage – and one was only recently added.

“The third thing I’d like to get is a change from the city charter about run-offs,” Hennigan said.

“I did not enjoy the run-off process. I thought it dragged out too long. I believe it cost the city a lot of money and was completely unnecessary.

“Mary and I won both times. It just took a lot longer and delayed us being able to get started.”

McKenna, director of Orange’s Golden Triangle Hospice, won election for the second time in three tries, having served District 4 as its representative from 2013-2016.

“This election was unique to me. It was my first time to have more than one opponent,” she said.

“It was OK. I learned a lot, my first time to be in a run-off. You’re always appreciative in a learning process.

“And I got to meet a lot of great people in Orange along the way. That was nice, too.”

Both Hennigan and McKenna were the top vote-getters in the city’s May 4 election but failed to receive the required 50 percent plus one vote majority required as their races included four and three candidates, respectively.

McKenna, who previously represented District 4 in 2013-2016, won 49.1 percent of the votes in a three-way race during the May 4 election, coming in three votes shy then of gaining the 50 percent and one vote majority required to avoid the run-off.

Voter turnout was expectedly light in the run-off.

Where 1,022 people voted in the city wide Place 5 At-Large race in May, less than half as many – 465 – voted during the June 3-11 early voting and June 15 election day voting combined.

While the city was not able to immediately put a number on the cost of its 2019 election, it said a year ago it budgeted $6,000 for that election. 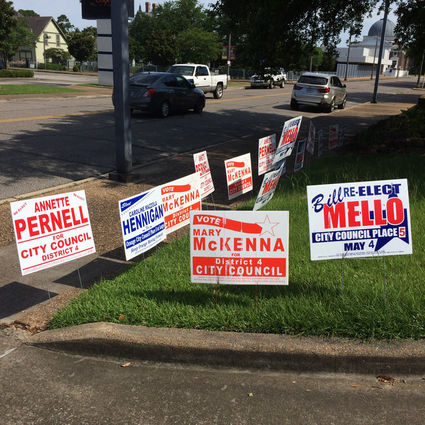 “I think it’s important to look at how many people voted in the run-off,” Hennigan said. “We had that expensive election for 400 people. They’re important, but this doesn’t seem like it’s well spent.”

Votes will be canvassed the week of June 24-28.