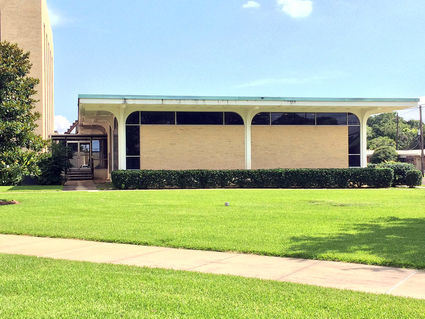 Photo: The District Clerk annex to the Orange County Courthouse has a leaky roof left over from 2017 and how best to fix it is frustrating commissioners and clerks alike. RECORD PHOTO: Dave Rogers

Neither was County Judge Carl Thibodeaux.

Nor Maintenance Director Kurt Guidry. Nor Nancy Beward, the lady tasked with obtaining government grants from FEMA and other agencies.

It rained all over the Orange County Commissioners’ Court meeting Tuesday afternoon near the end of a deep 90-minute agenda as Edgerly pleaded for someone to fix a leaky roof.

“Just put a tarp up on there and get some bricks to weigh it down,” Thibodeaux said, presumably to Guidry.

The maintenance chief is nearly two years into trying to repair county buildings damaged by Tropical Storm Harvey as fast as possible with as little county money as possible.

Beward explained Tuesday that under the terms required by FEMA, not only is the main county courthouse considered a historical building, but also the attached county and district clerk offices at each end.

“We can call TDEM [the state’s FEMA outlet] and have an immediate conference call and if they declare it an emergency, we’ll get it all in writing so you can proceed,” she said.

“If they say, ‘No, you’ve got to follow the normal procedure, it’ll probably be eight months down the road before we get an answer.”

The entire courthouse building was shut down after Harvey’s record flooding in August 2017. Many of those who officed there, moved back in after a few months, agreeing to put up with workers painting and doing final repairs at nights and weekends.

Edgerly wanted all repairs completed before her office moved from its temporary quarters in the County Probation building on Border Street.

They moved a year ago. But she says it has been leaking rainwater steadily.

“It was leaking when we moved back in there,” she said. “It’s leaking on the work stations, it’s ruined the floor, it’s leaking all over the place.”

The leaks she said were coming in from the roof.

“Sometimes it’ll be the windows, but predominantly it’s the ceiling,” she said. “My thing is I have been told they were going to replace the roof. I just continued to roll, but nothing is happening.”

Thibodeaux is the third county judge to head up the court’s responsibility for Harvey repairs.

Guidry said just to repair the clerk’s roof would cost $90,000, according to early estimates.

“I’m not getting involved in it,” he said after court Tuesday. “All I know is they have a leak and money is tied up.

“The way FEMA is now if you repair something before they give approval, then you don’t get reimbursed. The frustrating thing is having to wait on FEMA. It’s a pain.”

Edgerly said Tuesday was the first time she’d heard that FEMA money was involved in her repairs. She had been told it was being fixed with money from insurance payments.

“You feel like you’re being deceived whenever you’re not told the full thing,” she said. “You just feel like you don’t get anything but the run-around.”

In other action regarding the courthouse Tuesday, commissioners OK’d spending an extra $10,000 of an original $220,000 budget agreed to by former County Judge Dean Crooks to repair windows on the building’s front.

Architect Dohn Labiche said that pushed the total cost of the project to $189,000.

He said the work to repair and preserve the courthouse marble front was 80 percent complete.

The meeting began with a deposit of $560,000 from the state to account for April 2019 sales tax proceeds.

Tina Barrow, county elections administrator, asked for and received a $41,570 check from contingencies to purchase poll books [laptop computers] for the November election.

Barrow said she will returning for reimbursement $40,455 worth of poll books from a previous vendor that failed to ship the required hardware to run its unique software.

The county OK’d a final payment of $30,000 to Weaver and Tidwell for its 2019 audit – expected to be delivered next week – and $7,000 to a second vendor for accounting actuarial services connected to the audit.

Justice of the Peace No. 1 Hershel Stagner, Jr., was granted $5,300 to purchase a new copier and maintenance agreement.

The commissioners accepted a bid for $1,500 on four Vidor properties that had been foreclosed on by the county for lack of payment of taxes.