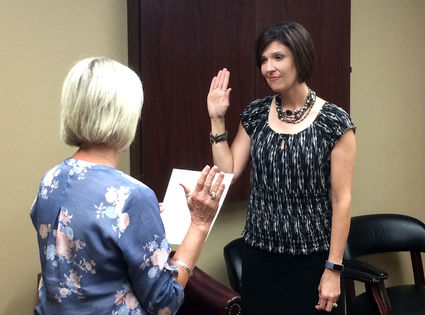 Photo: Laura Clark, right, prepares to repeat after Marla DuBose, as she takes her oath of office as a member of the Orangefield Board of Trustees at Monday night’s meeting.

Laura Clark, vice president for finance and administration at Olson Engineering, is the newest member of the Orangefield school board.

“I wanted an opportunity to give back and be a part of the school district and this is great,” Clark said after she was named to replace Jude Graffagnino on the seven-member board of trustees Monday night.

Graffagnino resigned recently because his son-in-law, Corey Sheppard, was being interviewed for a job in the district, school board president Dr. Ron Risinger said.

Sheppard, who was assistant principal at Little Cypress-Mauriceville High School, has been hired by the Orangefield school district.

“The kids of Orangefield have a bright future ahead,” Laura Clark said. “I want to be a part of it.”

A native of Orange and West Orange-Stark High grad, Clark is a Lamar University grad, with a degree in accounting.

She worked in private accounting for 10 years before spending 11 years at the City of Beaumont, the last nine of them as the city’s Chief Financial Officer. She joined Olson Engineering two years ago.

She will fill the final three-plus years of Graffagnino’s four-year term. He won re-election without an opponent in November of 2018. His term expires in 2022.

They were Stephen Quarles, Chris Kovach, Jack Smith and Clark.

“One of the nice things about Orangefield is we have so many people dedicated to our school district, and they get involved,” board vice president Marc Wernig said.

After a 40-minute closed session to discuss candidates, the board reconvened and voted 6-0 to appoint Clark to fill the unexpired vacancy.

“I’m honored that you would select me to join you,” she said.

Because Graffagnino had served as board secretary, a replacement for that officer position was needed, too. The board voted that honor to Brad Frye.