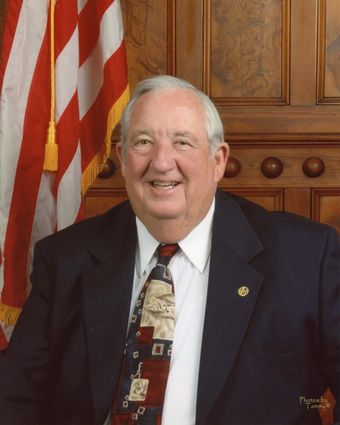 Funeral services will be at 10:00 a.m., Tuesday, June 25, 2019, at Claybar Funeral Home in Orange. Officiating will be Reverend Ryan Chandler of Trinity Baptist Church and Reverend Bob Webb. Burial will follow at Orange Forest Lawn Cemetery in Orange.

Born in Jacksonville, Texas, on October 11, 1938, he was the son of Rubin S. Hughes and Ovella (Simpson) Hughes. Jerry and his wife, Loretta, started their real estate business, Jerry Hughes Realty, in 1977. Jerry loved the town of Orange and the people in it. He was proud to call Orange his home. Jerry will be missed by all who knew and loved him.

He was preceded in death by his daughter, Angela Kay Hughes; his parents, Rubin and Ovella Hughes; his sisters, Mary Lynn Hughes, Melba Long, Bessie Williams, and Geraldine Collins; and his brothers, Harold Hughes and Wayne Hughes.

He is survived by his loving wife of 62 years, Loretta Ann (Burns) Hughes; his son, Jerry “Glenn” Hughes, Jr. and wife Debbie of Orange; his grandchildren, Jefferson Bennett “Ben” Hughes and wife Lisa of Nashville, Tennessee and Kayla Hughes Cheek and husband Nick of Bryan; his great-grandchildren, Mackenzie Rae Cheek and Isabella Bennett Hughes; and his brother, Harry Lee Hughes of Garland, Texas.

The family would like to thank Southeast Texas Hospice for the exceptional care that Jerry received, along with his wonderful caretakers Elaine Shaddell, Penny Materne, Brenda Wallace and Dorothy Bean.