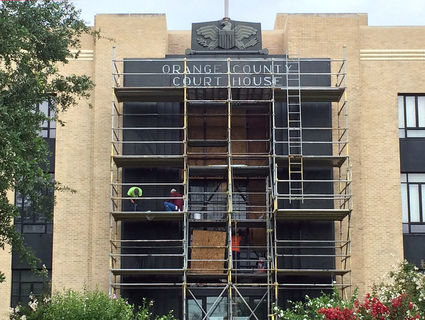 Photo: Workers for Vidor’s Marsh Waterproofing install framework around new windows on the front of the Orange County Courthouse Tuesday. Work on the courthouse entrance is set for to be finished by mid-July.

Orange County’s new outside auditors, Weaver and Tidwell of Conroe, ranked the county’s bookkeeping “the highest level you can receive” Tuesday.

The five-member panel in the high chairs of the County Commissioners’ Court was all smiles.

“It was a clear audit like we’ve had in the past,” Johnny Trahan, a third-year commissioner, said. “It should give the public a better sense that things are being done the correct way and they don’t have to worry about our finances.”

Weaver and Tidwell were hired in January to replace Waco-based Pattillo, Brown and Hill to put “fresh eyes” on the way the county does business.

Pattillo, Brown and Hall had been the county’s outside auditors for more than 20 year. State guidelines advocate a change of auditors every three to five years.

“I’m glad we changed firms,” first-year commissioner Theresa Beauchamp said. “It makes me feel better about it. Because a new firm has new eyes and they’ve looked at everything.”

With the expenses incurred by the county after Tropical Storm Harvey in August 2017, it was not a shock to find out that fund balance, also known as the “Rainy Day Fund,” had dropped from approximately $10 million to $7 million during the fiscal year 2018.

“The goal is always to have three months of operating funds for emergencies,” Greg Peterson of Weaver and Tidwell told commissioners. “You had about three and a half months and dropped down to two and a half months.”

The best news was that the county’s pension fund for retirees was 92 percent funded.

“Generally, we see in the low 80s,” Peterson said.

“This should set a lot of people’s minds at ease,” third-year commissioner John Gothia said. “People can see the county funds are being used like they’re supposed to.”

“The county’s in great shape,” he said. “I want everybody to realize that. The county’s going to take care of its employees and its citizens.”

The biggest change had nothing to do with the people preparing the Annual Financial Report for the Year ended Sept. 30, 2018.

It was a newly imposed accounting rule called the Government Accounting Standards Board [GASB] Statement No. 75 “Accounting and Financial Reporting for Postemployment Benefits Other Than Pensions.”

The Reports Statement of Activities for the Year showed the county had 2018 expenses of $64.9 million while its revenues were $38.5 million.

But factoring in a loss of $46.7 million due to the accounting rule change, the county’s statement went from a net starting position of positive $27 million at the start of the 2018 fiscal year to a net deficit of $25.2 million.

“This is not a current liability,” Peterson said. “This is just an actuarial accounting, what has to be paid out without current revenues.”

“That accounting rule change drives me crazy because it assumes 20 years of expenses but it doesn’t assume 20 years of revenue,” the commissioner said. “It’s kind of hard to stay positive when you just get the expenses and not the revenue.”

In regular reports, County Treasurer Christy Khoury reported the county had $92.3 million in pledged collateral available from Wells Fargo and First Financial Banks and Auditor Pennee Schmitt was given the OK to pay $530,834 in bills.

Among the bills paid was one for $295,000 for a year’s worth of property insurance and another for $75,000 for a month of healthcare insurance for the county’s 65-and-older retirees.

The property insurance premium went up $70,000 in a year, Schmitt said.

“They’re reviewing it and we should have an answer soon,” Ardoin said, regarding if FEMA will help pay.

“If FEMA says it’s not allowed, we’ll just go ahead on our own. We have it in the budget.”