Dr. Marty Rutledge, a longtime Orange physician, says he has 20 doctors interested in investing in his Orange Multi-Specialty Real Estate LLC and is “talking to 20 more.”

Their offices and surgical suites would be built at Eagle Point, which is located southeast of the intersection of Interstate 10 and Texas 62, on 20 acres of land donated by long-time civic booster Gisela Houseman.

“We’re trying to bring some specialized healthcare to Orange,” Rutledge said. “No hospital or ER was interested in coming here, so this is a mechanism for doctors to invest in an LLC [limited liability corporation] and build a medical complex.

“We’ll start with a surgical center, an imaging center, an infusion center and a cancer center. We’ll have a mini-hospital, with eight to 20 beds with an ER and urgent care. We’ve got space to do all the specialties we don’t have here.”

“We hope to start [construction] in September,” he said. “Once the city finishes with the infrastructure, putting in the boulevard and the drainage and sewage, we could open our doors within 15 months.”

The EDC board and city council agreed last year to spend up to $425,000 in EDC funds on a four-lane boulevard.

A car dealership, Gateway Chrysler-Dodge-Jeep-Ram, was previously announced as the first tenant on Eagle Point Boulevard.

“Ever since we lost the hospital, we have been working on bringing medical services back,” Houseman said. “If there was a developer and physicians that got together, if they were able to build what we need, I was more than happy to give them the land if that would build the project.

“Dr. Rutledge has been leading the physicians’ group. He has a high, high visibility in Orange and everyone respects him.”

Rutledge said he has gotten a lot of interest from Jefferson County physicians, as well as from Calcasieu Parish “and all the way to Houston.”

“Big hospitals are just not doing well, for a lot of reasons,” Rutledge said. “Look at St. Mary’s [the Port Arthur hospital recently closed by Christus.]

“But this is a non-traditional hospital thing, mostly day surgery. We’re using a group of consultants from the Austin area who have done about 80 of these things across the state and they’re all making money.”

Money is not the object, Rutledge said.

“It’s about serving the area. A lot of specialists feel the need to help their patients that live in Orange.”

Houseman and Rutledge weren’t the only ones delivering good news at Tuesday night’s meeting.

Stacey Gautreau, public affairs director for Dow Chemical, announced a $50,000 gift from the company to the city of Orange to be used for repairs to Memorial Park, located off Meeks Drive.

Additionally, she pledged 100 volunteer hours at the park “to show the city we’re 100 percent in to living here.”

The meeting opened with a canvass of the ballots in the June 15 council run-off election, which confirmed the election of Mary McKenna in District 4 and Caroline Mazzola Hennigan to At-Large Place 5.

Mayor Larry Spears led all council members in bidding a heartfelt thank-you to Bill Mello, who was defeated by Hennigan after serving 10 years on council.

Hennigan was sworn into office by attorney George Barron with her husband, Mike Hennigan, holding her Bible.

The city made official its disannexation of 416 acres of land recently purchased by Chevron Phillips Chemical by passing an ordinance amending the city limits.

Chevron Phillips Chemical has purchased nearly 1,700 acres of land near Chemical Row and has named Orange a finalist for a $5.6 billion investment for an ethylene plant.

“This is a move by the city to be sure we are a finalist,” Spears said after the vote.

Council OK’d resolutions directing Kelvin Knauf, interim city manager, to apply for two disaster recovery grants from the Texas General Land Office, one for $7.9 million and the other for $3.2 million.

The grants are sought for water and drainage and fire protection projects.

The only non-unanimous vote of the 90-minute meeting came when council attempted to name a new mayor pro-tem.

Patrick Pullen nominated Terrie Salter who received only three votes (by Pullen, Salter and Brad Childs), not enough for election.

Hennigan nominated Paul Burch. He, too, received three votes (by Hennigan, Burch and Spears), not enough.

Salter then nominated Pullen, the current mayor pro-tem, for another term. He got four votes (by Salter, Pullen, Childs and Spears) and won reappointment. 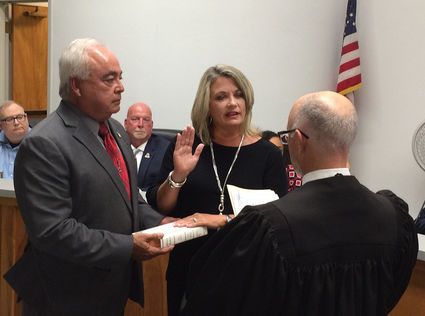