A changing of the guard at Burgertown 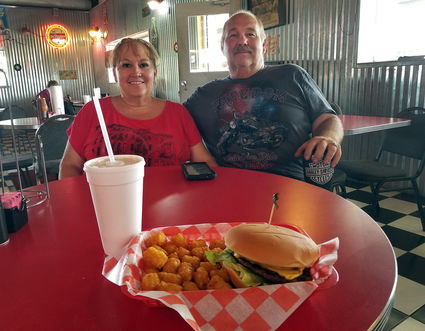 Fireworks, music, hot dogs and apple pie are what the 4th of July is all about…and burgers. While everyone is enjoying Independence Day activities, there is a changing of the guard underway in Orangefield.

After 24 years of running Burgertown, Bruce and Donna Self spent one last day, Friday, in their beloved establishment, surrounded by their grandchildren “terrorizing” the dining room.

Burgertown closed for the July 4th holiday Friday night. It will reopen July 9 with new owners. It puts a pin in an era, but doesn’t end it, as traditions will continue.

Self said the new owners wish to remain anonymous. “We sold the business to a local, hometown family. We’ve been approached by other people to buy in the past, but we just never felt like the people were the right people to continue the legacy that Burgertown has. It was built in 1958 in Bridge City. You have to have a passion for it and these people that are purchasing it; they have the passion and the drive to continue on the legacy, just like we did.”

“They do have all the recipes and everything that has always been about Burgertown, the onion rings, the pizza burger, it’s still like it was. If anything changes, it’s going to be for the better. They are going to make improvements.”

Bruce said the timing was right. “We’re getting up in age. We’ve lost some of our drive. They’re young.”

Donna said, “We’re missing too much stuff with our grandkids…baseball games, birthday parties.”

Since the new owners are staying anonymous, they will have a manager in place to run it and the current employees are staying.

“As far as I know, the menu is staying the same,” said Bruce. “They may make some additions, some things we never had. I think it will be good. I think the people will enjoy it.”

“We feel like we did our part, 24 years. Just like we carried on from the Viators that originally had it… I think he will carry on the same deal.”

Self said, “I don’t know for sure, but I would be willing to bet this is the oldest same name, same recipe restaurant in Orange County.”

The Selfs bought Burgertown in 1994. They moved it to the location on Farm to Market 1442 in 2001 and have been in the new building for seven years.

The move from Bridge City to the 1442 location was due to a couple of things. Years ago, there were only Burgertown, Lee’s Dip-O and the Caboose Café in town, but later, Sonic and other Burger joints moving into the area diluted the money. They noticed how much Orangefield was starting to boom. It didn’t have any restaurants.

“It’s been more successful here than it ever was in Bridge City. To me, it was a brilliant move to bring it out here because we now serve Bridge City, Orangefield and Vidor.”

Donna chimed in, “…and Mauriceville. We’ve got them coming from Port Arthur even.”

“I retired from the plant in ’06, so this is my second retirement,” said Bruce. “The timing is just right on all kinds of levels. He (the new owner) has a real passion for food and he has a drive. It couldn’t have been better for us.

“The thing I would like to say to the people is don’t be said, be glad because it’s still here and it’s going to have improvements.

Travel and attending grandkids’ baseball games are on the top of Donna and Bruce’s retirement to do list.