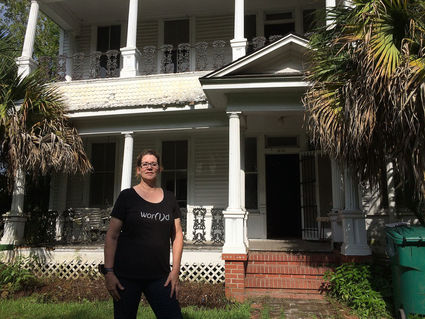 Photo: Developer Penny Wheeler stands in front of the century-old home on 10th Street that she plans to use as a centerpiece for Greens Bluff, a block of shopping spots in Orange’s Historic District.

Putting some life back into Historic Orange is what Penny Wheeler has up her sleeve.

She and her husband Doyle have purchased a block of homes and vacant land near the Orange Train Depot and are starting to convert it into Greens Bluff, a new destination for shopping, sipping lattes and sleeping.

“We want to bring back to Orange a real center for shopping,” Penny Wheeler said. “There’s no place where you can go shop door-to-door.

“We’ve lost a lot of that hometown charm, and we want to bring it back.”

Her name for the development bordered by 10th, Pine, 11th and W. Elm Streets was also the first name for what became the City of Orange.

Wheeler, who moved to the city from Washington four years ago, knows that well. She has learned a bit about local history in the 17 months she’s been working on the real estate and building permit deals.

“We are within walking distance of the Orange Depot, the Stark museums, the Lutcher Theater, restaurants and the waterfront,” she said. “We are working hard to bring back a place for Orange folks to enjoy one another, shop and eat right here, at home.”

The centerpiece of her plan is a century-old home at the corner of 10th and Pine, built in 1915, according to records at the Orange County Appraisal District.

It has 2,800 square feet on two stories and its front room once served as a judge’s courtroom, she was told.

She plans to turn each big room into a retail space, and add a commercial kitchen. She envisions “a coffee hut, with a little bit of seating,” and a drive-through.

Her hope is to have the house up and open for small business by the end of the year. Then she’ll turn her attention to the rest of her property to cap off a project which she has budgeted nearly $2 million.

“The rest of it is a two-year projection,” she said.

In all, it involves 11 lots, Wheeler said, but only one more house.

It will also host retail shops, Wheeler plans, as will five or six row houses she aims to build on the southwest side of the property.

Each of row houses will have a shop on the ground floor and an Airbnb apartment up top.

“We want to do Airbnb so people will have a place to stay when they’re in Orange,” Wheeler said. “We have hotels but they’re not conducive for foot traffic.

She plans a “town hall” pavilion where people can gather out of the sun or rain and plenty of parking.

“There are so many cultural things you can do here, plus sporting things like the Showdown on the Sabine boat races and fishing tournaments,” Wheeler said.

“We have as many people come to town for boating and fishing events as we have in the town. We want to be able to service them better.”

City council member Brad Childs, owner of Childs Building Supply and Ace Hardware, is a big supporter of the project, particularly the work on historic building. His background includes architecture and construction management.

“I’m beyond excited about the Greens Bluff project,” he said, “and just like the restoration of the Orange Depot, the Wheelers are saving a part of Orange.

“We build with ‘hopes and dreams’ in our projects. That’s the point. The Wheelers have the same hopes and dreams for this home, this beautiful lady of a time long forgotten.

“Orange needs to rally behind this.”