The annual phone calls are coming in to the Orange Police Department.

Thursday marks another anniversary – the 17th – of the disappearance of 4-year-old Dannarriah Finley from her Orange home.

The unsolved murder is hardly a “cold case,” though.

“It’s an active, working case,” OPD Capt. Robert Enmon said. “We have an officer assigned to it.”

Every few months network news tells of old cases being solved by new DNA techniques. That’s the kind of news local officials would welcome instead of the annual check-up calls from local media.

“From time to time, as new technology comes up, we submit evidence. We’ve got several things at the lab right now,” Enmon said.

“The results we’ve gotten back in the last two and a half years had narrowed our group of ‘persons of interest.’ But it hasn’t given us our suspect yet.”

Area citizens reacted to news of the missing girl by volunteering to help search. Helicopters and horses assisted in the search.

Four days later, her body was found on Pleasure Island in Port Arthur by a pipeline inspector, wrapped in a bed sheet.

She had been sexually assaulted before being strangled to death, an autopsy revealed. 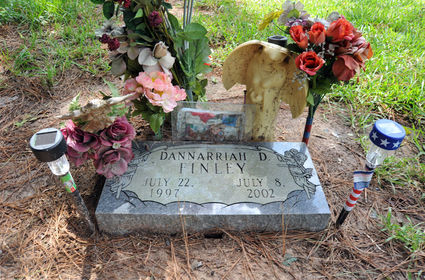 Detectives from Port Arthur joined OPD to work the case. The Texas Rangers and Federal Bureau of Investigation lent assistance.

“All our homicides are major cases, but that one – where a young girl was kidnapped, sexually assaulted, murdered and left out for the alligators – that one’s always on our mind,” Enmon said.