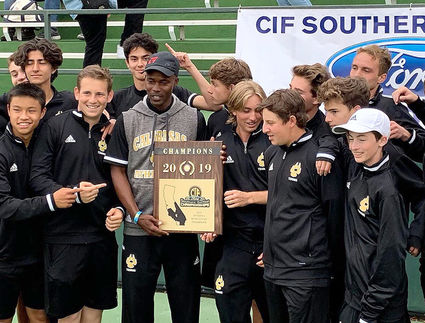 Gerald Mathews had great athletic ability in high school, but he was too small for team sports. He never let that hold him back. Today Mathews is a tennis coach in California and his team recently captured the CIF Southern Section Division 2 championship at the Claremont Club in Claremont, California.

“When I was little my mom told me to try and change the planet you were assigned to,” said Mathews.

“Some people would say winning a State Championship is the pinnacle of high school coaching, but to me, this message made the title valid and much bigger than a trophy.”

His small stature made football out of the question and he didn’t have the height for basketball. His mother, Velenta Mathews, said he was a great soccer player, but that wasn’t a fit either.

“You need to find an individual sport,” his mother, AKA: Vinnie, told him. He was great at golf, but it was too expensive to pursue. Mathews settled on tennis. Rackets cost $40. His mother said she would put in $10, but he would have to earn the rest to get a racket. Vinnie said he earned an additional $10 and found a racket for $20 at Walmart. Even though he finally had the proper equipment, he had to earn the right to even try out for the team. West Orange-Stark tennis coach Michael Washburn made Gerald spend the summer before his junior year playing each of the top six players on the team and keep the scores.

Coach Washburn let him try out and within two weeks, Mathews started winning and took the number one spot on the team.

Back then F&F Sports was the only place in the Orange area where you could get a tennis racket restrung. Mathews acquired a stringing machine and taught himself to restring rackets. He started stringing rackets for the entire team. Becoming an entrepreneur is how he earned money for equipment and trips when he joined the USTA Teams Tennis Association.

“We went all over the state once a month for competitions,” said Vinnie.

When he graduated from West Orange-Stark High School in 1993, he became the only American to be recruited for the Lamar Tennis Team, which included the #1 player from Australia.

Mathews has been coaching at Calabasas High School in Calabasas, California for five years. This year’s championship was the first one for the school in 25 years.

“We should be in sound shape for the future,” Mathews said. “It’s great for our community and our program. You can’t put a price tag on winning and once you get a taste of it, you want to do it again.”

It looks like another local athlete will be earning a spot in the history books.