BC native Gothia takes over in OC 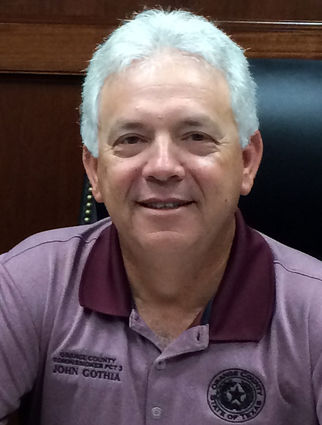 The decision was hardly a secret, so the Orange County Commissioners set a record Tuesday for the shortest closed meeting.

It took only a couple of minutes to reopen the doors to the Commissioners’ Courtroom and vote unanimously for John Gothia to become next Orange County Judge.

The Bridge City native will head up county government here until at least Dec. 31, 2020, when the four-year term initially begun by Dean Crooks comes to an end.

Gothia apparently was the only one considered. Commissioners Johnny Trahan, Theresa Beauchamp and Robert Viator said other than Gothia no one approached them to seek the job.

Among those voting 4-0 to elevate him to the job was Kirk Roccaforte, the former Bridge City mayor.

Roccaforte began the meeting in the audience but traded places in the courtroom with Gothia after Roccaforte’s $3,000 bond was accepted by commissioners.

Both Thibodeaux and Gothia resigned their spots on Commissioners’ Court July 2.

Thibodeaux, who had previously served from 1995-2014 as county judge, had been filling in after the sudden resignation of Dean Crooks in March.

He said upon turning in his resignation two weeks ago that the commissioners no longer need his help.

Gothia said upon resigning as commissioner that he was doing what state law required for him to seek the appointment as county judge.

The quirky law governing such a circumstance requires that all four commissioners’ positions be filled before appointing a new judge.

It also requires that resigning members of the court continue serving until their replacements are seated, which comes after the newcomers are sworn in and the court approves the execution of a bond.

Gothia, 57, will be sworn in at noon Friday in the Commissioners’ Courtroom at the County’s Administration Building.

A special meeting is called for 3 p.m. Friday so commissioners can accept a $3,000 performance bond from Gothia and he can take his seat as judge.

“A year ago if you’d have told me I’d be county judge, I’d have told you no way,” Gothia said. “But opportunities arise when we don’t expect them and here we are.”

Gothia and Trahan, the Precinct 1 Commissioner, were each elected to office in 2016 and took office Jan. 1, 2017. They are the longest tenured members of Commissioners’ Court, with Trahan moving up to Judge Pro-Tem after Gothia’s July 2 resignation.

Orange County’s fourth county judge in 16 months, Gothia will earn a $105,040 annual salary, the same pay rate that Crooks and Thibodeaux received in 2019.

The pay represents a 66 percent raise for Gothia since he came to the court in 2017.

The retired wholesaler for Altria (formerly Phillip Morris) was paid $63,118 per year initially as a commissioner, then voted for an elected officials raise that boosted his salary to $72,800 just nine months in office.

“My job when I came here was to grow the county,” he said. “I’ll keep on working on that, keep the budget balanced and keep us fiscally responsible.

“We’re still working on Harvey [recovery from Tropical Storm Harvey in 2017]. We’re two years in, but that’s not very long in hurricane relief. Drainage is another big priority.”

The commissioners will begin work on the 2020 budget and 2019 tax rate next week, after Karen Fisher, the county’s tax assessor-collector, receives the final tax valuations from the Appraisal District.

“I’ve always been a budget guy,” Gothia said. “I’ve always liked the numbers, and I’ve spent a lot of time with our auditor [Pennee Schmitt] since I’ve been here. 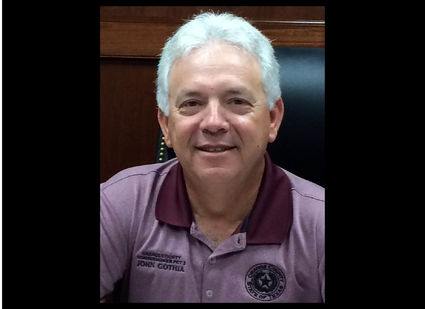 “We’ll just continue to do the job we were elected to do.”

Thibodeaux’s final commissioners’ court meeting clocked in at 22 minutes before the closed session at the end.

Besides accepting Roccaforte’s bond and appointing Gothia, commissioners accepted $394,685 in sales tax receipts from the state for the month of May and approved paying $193,230 in weekly bills.

Commissioners awarded Ashbritt Inc. and TetraTech contracts to be the county’s disaster debris hauler and debris monitoring service. The two companies worked for the county after Harvey and were recommended by a committee headed by county purchasing agent Connie Cassidy.