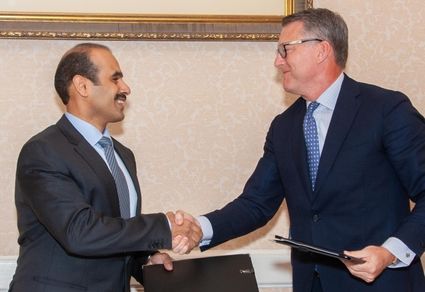 Cutline: Saad Sherida Al-Kaabi, president of Qatar Petroleum, shakes hands with Chevron Phillips Chemical president Mark Lashier during a signing ceremony at the White House for an agreement to jointly pursue a new petrochemical plant for the U.S. Gulf Coast.

IF only it comes in for a landing.

If Chevron Phillips Chemical should ultimately choose Orange County for its new multi-billion-dollar ethylene plant, it will be doing so with a new partner, Qatar Petroleum, and on a grander scale than earlier advertised.

But the company’s July 9 announcement of a 51-49 partnership on the project with the state-owned petroleum company of Qatar, hosted at the White House by President Donald Trump, continues to leave the location of such a project up in the air.

The good news for whatever community lands the plant is what was originally touted as a $5.6 billion investment for a two-unit plant in January is now being listed as an $8 billion plant with three units, according to details in a July 9 news release.

The City of Orange has disannexed 400-plus acres of the site that were in city limits so Orange County can create a Reinvestment Zone needed to offer an abatement.

Kelvin Knauf, Orange’s acting city manager, said in May CPC had told city officials “this is their preferred site,” but added, “there is no guarantee that Chevron Phillips Chemical will choose the Orange site for their new chemical plant.”

“Orange is a finalist, however the location is only one of the alternatives on the Gulf Coast,” he said. “It is premature to say that Orange is definitely where we would put a petrochemical facility.”

The plant will include one of the world’s biggest ethane crackers, a unit that processes the natural gas liquid ethane into ethylene, which, in turn, is converted into polyethelene, then plastics.

It will have a capacity of turning out 2 million metric tons (or 2,000 kilotons) of ethylene per year, also written as 2,000 KTA.

There will also be two 1,000 KTA high-density polyethylene units, the release said.

The timeline for deciding where to locate the plant has been extended from mid-2020 to 2021, according to the release, but the expected startup date remains 2024.

“I don’t know if this project having joint leadership will slow things down or not, but having QP involved might be a good thing,” said Johnny Trahan, Orange County Judge Pro-Tem, “because now they’ve got more money.”

Jessica Hill, executive director of the Orange County Economic Development Corporation, which has been involved in recruiting Chevron Phillips Chemical to build here for at least a decade, said all she knew about a change in the decision timeline was what was made public a week ago.

“The county is proceeding as necessary at the request of CP Chem,” she said.

John Gothia, who was appointed Orange County’s fourth County Judge in 16 months Tuesday, said he didn’t expect any request for an abatement to come to the county until all environmental permits were secured.

“I’m sure whenever that stuff is done, they’ll come to us,” he said.

“It’s kind of frustrating, though, because we’re ready to see it happen. For us in Orange County, it can’t happen soon enough.

Marissa Luck, business and energy reporter at the Houston Chronicle, reported Chevron Phillips had previously confirmed it was considering Orange and Sweeny as sites for possible expansion among other unspecified sites in Texas and Louisiana.

Orange has been home to a CPC plant since 1955 and the new property abuts the existing Chemical Row plant.

Luck also mentioned a plus for Orange was its proximity to the Mont Belvieu chemicals and natural gas liquids hub.

Chevron Phillips Chemical has maintained from the start that its decision will be financially based.

“The impact of property taxes on the economic return is a major determining factor in the site selection process,” the company said in January in the first of three applications filed by WOCCISD for a limit of appraised value under Texas Tax Code Chapter 313.

“Without a limitation [on property taxes] … siting the project in Orange County is not competitive with comparable investments.”