Photo: Lois Smith of Orange shows a 1944 photo of the loading of the US Navy ship USS LST 496. Her great uncle, Doug Goodman, of Orange, was killed when the ship struck a German mine just off Omaha Beach during the Allied Invasion of Normandy in June 1944.

For more than 75 years, Orange’s Lois Smith has waited for her uncle Doug Goodman to come home from the D-Day invasion.

Smith, 82, is expecting that the sailor’s body will be identified any day now by DNA testing and returned to a grateful family.

“I have it in my heart that we’ll know something by the fall,” she said.

Goodman was a sailor aboard the LST 496, a Tank Landing Ship, that delivered a load of heavy cargo to Omaha Beach on D-Day, June 6, 1944.

Then it sailed back across the English Channel. It was part of a night convoy carrying a second load at about 2 a.m. June 11 when torpedo boats attacked its convoy near the Normandy beaches.

Three of the ships were hit by torpedoes.

Goodman’s ship took evasive actions to avoid the torpedoes and struck a German mine.

The explosion tore both bow [front] doors off the ship and LST 496 went down bow first, with its propellers out of the water.

Butch Smith, son of Lois Smith, has done a lot of research on LST 496, but could not say how many of the 110 crew members and officers aboard perished in the tragic events.

Just that Seaman First Class Doug Goodman was among those listed in missing in action on June 12, 1944.

A year later, the U.S. Navy declared him dead.

Eugene Goudeau, now 95, grew up in Orange and like Doug Goodman, his family followed the sawmills from Louisiana to Texas.

He and Goodman were best friends.

“We’d meet up, go shoot some pool, look at girls,” Goudeau recalled. “We started to learn to dance. We went to a party now and then.”

After the Japanese bombed Pearl Harbor, the two enlisted in the U.S. Navy together. But after basic training together in Great Lakes, Ill., they were separated.

Goudeau was shipped to the Pacific aboard the USS Dyson, a destroyer built in Orange, and Goodman was shipped to landing craft training on the east coast.

They never saw or spoke to each other again.

“I’ve known the Goudeaus all my life,” said Lois Smith, who was called Charlene Talbert when she was young, to avoid confusion with her mother, Lois Talbert.

“He was 19 in 1942 and I was 6 years old,” Smith said. “I can remember getting in the car and driving back to my grandma’s because Uncle Doug was home from training before he left for overseas.

“I was with my mother and grandmother when the Western Union boy came to tell them he was missing. I remember when they declared him dead.”

Doug’s father died in 1930, at age 56 when the young man was just 5. His mother died at 67 in 1948, four years after Doug was declared missing, three after he was declared dead.

“That was my grandmother’s baby boy,” Lois Smith recalled. “She lived with so much hope that year [after Doug was declared missing]. She died not long after he was officially declared dead.”

But that may change.

Smith said about three years ago contractors working for the U.S. Navy had contacted her son asking for a DNA sample.

“I was contacted by a genealogist from the Office of Navy Pow-MIA,” said Butch Smith, a Dallas real estate developer. “She hadn’t been able to locate my mother.

“What she said was her department won’t identify anything until they absolutely, positively identify a sailor.

“It is a rumor, that’s all it is, that a number of sailors were buried together on the shore of Omaha Beach, including those washed ashore. There was a rumor they may have located that grave and are hopeful of identifying the sailors.

“They’re choosing their words carefully. They’re being quite respectful, to be honest.”

“Every couple of months they send me a note,” Butch Smith, a Bridge City High graduate, said. “But it’s very generic. They don’t want to give us false hopes.”

Lois Smith said she had kept the news from the Navy a secret until recently.

“I would have preferred to keep it quiet until they were 100 percent certain. But on D-Day this year, I felt guilty because I’d never told Eugene [Goudeau],” she said.

“You can’t imagine what it was like when they asked for DNA,” Lois Smith said.

“They’re not going to tell you they found your loved one until they know for sure. But they don’t call you for nothing.” 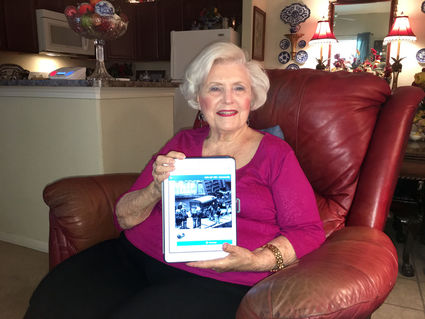 Smith said no final decision had been made about where Doug Goodman’s body would rest if an ID is confirmed.

He has two headstones already marking two empty graves, one at the American Cemetery at Colleville-Sur-Mer in Normandy, France, and the other in the Harris Cemetery in West Orange.

“We feel good that we’re going to finally have his remains,” Lois Smith said. “Then we’ll have an opportunity for burial in the cemetery over there [France] or bring him home to be buried with his parents and siblings.

“I know my grandmother would want him brought back here.”