Gothia takes over leadership of county 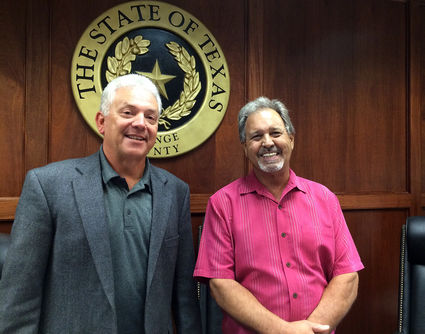 Photo: John Gothia and Kirk Roccaforte were stationed together for the first time in County Commissioners’ Court Tuesday as Gothia took over as county judge next to Roccaforte, the man who replaced Gothia as Precinct 3 commissioner. RECORD PHOTO: Dave Rogers

John Gothia, mentioned as likely county judge way back in March, finally got to lead an Orange County Commissioners’ Court meeting from the middle seat Tuesday.

“Just doing the normal business of the county, just in a different seat,” he said after a short agenda turned into a long day.

Only 13 agenda items greeted the former commissioner, who was sworn in last Friday after being voted into the county’s top elected office Tuesday, July 17.

In a four-week process, Gothia replaced former judge Carl Thibodeaux. After serving as county judge for 20 years (1994-2014), Thibodeaux came back this spring as a three-month place-holder after Dean Crooks skipped out after a disagreement regarding economic development incentives.

Gothia first took county office as Precinct 3 commissioner in 2017, after being elected the previous year.

Kirk Roccaforte, Gothia’s replacement as Precinct 3 commissioner, took his seat a week earlier than Gothia due to a quirk in state law.

“It was a good first meeting,” Gothia said. “Uneventful, I guess, would be the easy way to say it.”

The first 11 items on the agenda flew by in 30-odd minutes but a pair of closed sessions lasted 45 and 25 minutes, respectively.

The first involved “pending or threatened litigation” and the commissioners were joined by Sheriff Keith Merritt and Lori Ardoin, human relations director. No action was taken.

After the shorter meeting, for which Merritt was replaced by Jessica Hill, director of Orange County Economic Development Corporation, Hill was instructed to “draft a letter of intent to Confidential Project G,” according to assistant county attorney Denise Gremillion.

Wording of that agenda item was particularly full of gibberish and unending possibility: “Deliberation regarding commercial or financial information that the OCEDC has received from a business prospect that Commissioners’ Court seeks to locate, stay or expand in or near the territory of Orange County and with which the Commissioners’ Court is conducting economic development negotiations, or to deliberate the offer of a financial or other incentive to such a business prospect … regarding any current confidential OCEDC projects.”

Gothia complained that he’d spent two hours straight in his new chair. But the hours could be longer as the county is expected to begin budget hearings as soon as next week.

“Well, I’ve already started budget talks. They’re already under way,” Gothia said. “Most everybody’s sent in their wish list for next year and we’ve been putting our numbers together for where we’re at today.”

Tuesday’s meeting included a vote to renew employee health insurance for next year at a $77 per person increase, leaving the county paying $857 per month per person.

Representatives of the Texas Association of Counties, who offer the group insurance, reported in a workshop last month that Orange County employees received $107 in benefits for every $100 the county paid.

In previous years, the group reported Orange County as the unhealthiest county in Texas.

Commissioners approved paying $340,000 in weekly bills and Karen Fisher, the tax assessor-collector, reported that the county had received $281,000 in June tax collections and that 96.21% of 2018 property taxes had been received.

Commissioners approved a $20,000 expenditure for an updated phone system to service the county’s offices on FM 1442.