The Show Must Go On

They lost their theater home in Hurricane Harvey and lost a beloved member of their community a few months ago, but in theater, everyone knows the show must go on.

Without a functioning theater, Orange Community Players, Inc. has been relying on their neighbors to continue performing.

“This year, with the formation of OCP's Junior Board, we were able to incorporate youth in all areas of the production,” said Eymard. “Several of the Jr. Board worked behind the scenes of rehearsals and performances.”

Logan Eymard served as the Assistant Director, Jack Reneau, worked lights and sounds, and Hollie R was Stage Manager while Bella M tended props and was the backstage crew.

“The cast and crew had a great time putting on ‘15 Reasons NOT to be in a Play...and A Play.’ They chose a 70's theme for costumes and sets,” said Eymard. She said all the cast and parents helped make this "a groovy production."

“Thank you to everyone who came out and supported these talented young people. They are the future of live theater. Thank you to our many corporate sponsors, as well,” said Eymard. “Peace, love and theater!”

“The production is dedicated to our late friend and treasured colleague, Joshua Scales,” states the event announcement.

Tickets are $50 and include a gourmet candlelight dinner. The four course dinner begins with your choice of soup: tomato bisque or cream of potato; deluxe garden salad with creamy balsamic vinaigrette dressing; entrée is a choice of roasted tenderloin of beef or grilled fillet of red snapper with baked russet, and choice of spring medley of vegetables or asparagus ala Doug, and finishes with dessert, coffee and tea.

Vasquez suggests getting a Thursday ticket if you want to see Milton Hardin perform, as he will not be there Friday. He will be competing in The Voice Beaumont at Rumors. 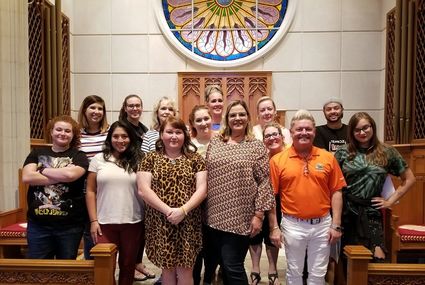 You can purchase tickets through their Facebook event page or through ticketstothecity.com