Mike Reed, a 10-year veteran of the Bridge City City Council was brought back by council to fill the Place 2 position. That spot was previously held by Kirk Roccaforte, who resigned to accept appointment to Orange County Commissioners’ Court. RECORD PHOTO: Dave Rogers

He was appointed to fill out Kirk Roccaforte’s seat on council on Wednesday, July 24, then the council began budget workshops the next day.

“It’s only a few days I’ve been on the council, so I’m basically trying to get caught up with what’s going on around town,” Reed said.

He’s a retired electrician who has spent the past 14 years driving a school bus.

The rate proposal must be confirmed by city council at its next meeting, Tuesday, Aug. 6 and then published prior to a public hearing, before being finalized by council.

The effective tax rate is that rate needed to realize the same amount of property tax values year to year.

But Jones and the council members want to give all city employees a 3% pay raise to match the one recently negotiated by the police union.

Like all Texas city leaders, Bridge City’s are eyeing a new state law which will limit future tax rate increases to 3.5% above the effective tax rate, unless citizens vote to OK more.

The preliminary effective rate for Bridge City is 50.7 cents per $100, according to city staff.

The old threshold for a rollback election, which remains in place for this year only, is any raise of 8% or higher than the effective tax rate.

That’s $80,000 more than the city would realize by holding its tax rate to 3.5% over the effective tax rate, Jones said. 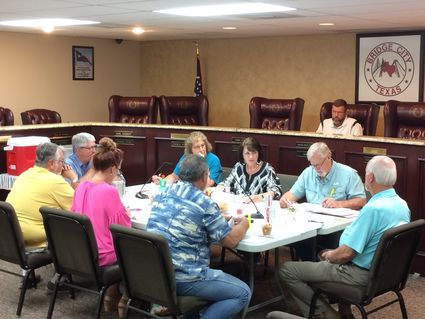 Included in the $8 million budget proposed by Jones, one that receives inputs from industrial plants, state and federal sources as well as water and sewer services, is money to pay a new public works director.

Jones, who was hired by the city to be public works director nearly 20 years ago, has done double duty since taking over as city manager.

But he said he will be advertising the job soon.

“What I’m proposing to do, I’m not ready to divulge yet,” he said. “But I think it’s what’s best for the city. I think it’ll have the city on the right path for the next 20 years.”