Creating a little slice of Hollywood in Orange County

Not all filmmakers live in Hollywood, or Georgia, or even Austin. There is a small group of independent filmmakers that are creating movie magic right here in Southeast Texas.

Granted, Orange County isn’t the first place that comes to mind when you think of movie making, but there are some people that think we have some great locations in our area and are doing their part to show that to the rest of the world.

There are three short films in various stages of production this summer, two of them being shot in Orange County.

“Hoot” a horror/thriller/comedy short is being filmed in the north Vidor area. The weather gave it a few rain delays, but it finally got underway this weekend.

“Shhh” a spy/romantic comedy, or romcom as it is referred to in the industry, is scheduled to start shooting in August in Orange and Bridge City.

“Spindletop” is more of a western/historical drama, because of the time period. It is a short about Patillo Higgins and the start of the oil boom in Southeast Texas. The short is a precursor or “proof of concept” film to a planned feature that will be shot in multiple locations in Southeast Texas once financing is secured.

Travis has been involved in filming since the 7th grade.

“My mom got a Sony Handycam camcorder for Christmas and I got a lightsaber. So naturally I had to film myself swinging around a lightsaber on my mom's camera,” said Myers about his filmmaking debut. “The 3-minute film of me swinging around a lightsaber in my garage, fighting the evil version of myself in a paintball mask was called "Star Wimps." My cousin and I ended up making a couple more stupid videos on my mom’s camera including “Star Wimps 2,” “Larry Bond and Silver Pinky,” “The Good the Bad and the Cow”... the list goes on.”

Myers said he got so excited he put the first two “Star Wimps” videos on a VHS tape and convinced two of his teachers to show them in class.

“I was so proud and one kid even paid me $20 for a copy. I now know that should have been the most embarrassing moment in my life because those films were absolute garbage, but that's really what got me started,” he said.

“I'm naturally drawn to comedy. I don't take myself too seriously and comedy just seems to come natural.” Myers said he likes other genres and working on other people's projects of different genres, “but if it's my personal work I'm going to try to make the audience laugh, or at least make myself laugh. That’s the goal.”

His loves making a project that looks good. Something the whole cast and crew can be proud of. Myers also cherishes making memories with everyone involved.

“Some of my favorite memories in my life have been when I'm on set with a bunch of my best friends.” Myers loves going through the struggles of putting together a movie and learning how everything works on the way. “Some great nicknames, inside jokes, and friendships have all generated from time I've spent creating videos, so for that reason I'll keep making them.”

His goal is to make these summer films the best looking projects he has ever been involved with.

“We don't have the largest budgets to work with, but I want to make people think we do,” he said. “I will be the director of photography for at least two of these films and at least behind the camera for the other, so it's my job to direct everything that has to do with the camera and lighting. I've spent a lot of time researching lighting techniques and I've spent probably too much of my own money investing in gear and lenses to make sure I do the projects justice. From what I've seen from the shoot last weekend, I think I'm on the right track to make it happen.”

Myers hopes these three films will spark growth in the film community in SETX.

“I'm a big believer that if there isn't a ton of opportunity where you are, you have to be willing to go out and create opportunities for yourself. That's the mindset I've had for the past few years and it seems to be slowly paying off.

“I would love to see more quality film work in SETX because I believe we’ve got some great local talent, great locations that have never been used and great stories that need to be told.”

Once these films are complete, Myers has a few wedding films in the queue until the next great project pops up. Weddings are the side hustle he does with his wife.

“Hopefully we can make these films the best they can be and spark more outside interest in our little film community in SETX.”

Myers says he is currently writing a script that would be the largest project he’s ever taken on.

“I have a goal to have a film I've worked on shown at the SXSW Film Festival before I'm 30. I'm 27 now so I've only got a little bit of time left to make it happen. But seeing how far our group has come in the past 2-3 years, I think we can make it happen.”

If you would like to see some of Travis’ work, he will have a 48 Hour Film Race entry screened at the Jefferson Theatre Aug. 10 as part of the BMT Film Fest.

A 48 Hour Film Race is a competition where a film is made from concept to completion in two days incorporating assigned parameters.

This year, all films are comedy with an assigned subgenre and line of dialogue.

How could he pass up his favorite genre? Myers is a member of team “Make Films Great Again,” which also includes another Orange resident, Anthony Fraccastoro.

The team has won the Boomtown Film and Music Festival 48 hour race the last two years in a row and has a chance to make it a threepeat. 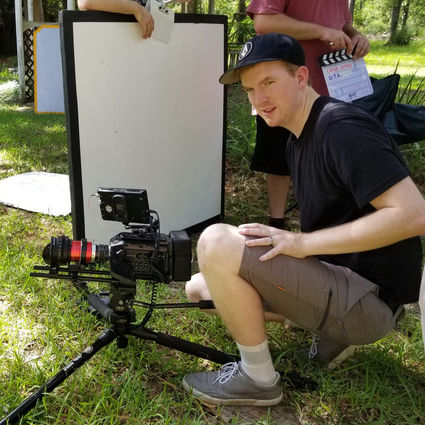 Fraccastoro is also a member of Fresh Productions and will also be on the film crew for all three films as key grip and assistant cameraman.