Photo: A worker from Aftermath Disaster Recovery operates a grapple on a barge to scoop up trees and tree limbs that are blocking the Adams Bayou waterway in a “de-snagging” operation overseen by the Orange County Drainage District. RECORD PHOTO: Dave Rogers

De-snagging is going full steam on the north end of Adams Bayou in Orange.

Crews from the Orange County Drainage District, with contract help from Aftermath Disaster Recovery, are pulling trees and tires and even old furniture from the waterway that was so backed up by Tropical Storm Harvey that many blame it for flooding 16th Street and downtown.

The work that’s been going on for several weeks between rainstorms is being paid for primarily by two grants totaling $850,000 from the Natural Resource Conservation Service and the Texas Water Development Board.

“The majority of the fallen trees were north of I-10,” said Don Carona, general manager of the Drainage District.

He said the project’s parameters called for “longstick excavation” over a length of six or seven miles.

The starting point, early in July, was north of the Cowboy Church.

That was the “local force” account, with all the labor and machinery furnished by the Drainage District. At that point, the bayou was too narrow to hold the barge that began working downstream last week.

Up on the Peveto Ranch, Drainage District workers were in the bottoms chainsawing trees and using chains and “land machines” to bring the logs to the banks.

From there, they were trucked to a central spot for burning.

“Mr. Peveto has been very gracious,” Neal Ford, the Drainage District’s chief of rightaway and special projects, said. “He told us to do whatever we needed to open it up.

“There’s a lot of cooperation between us and the people of Mauriceville.”

There, a boat pilot steadied a 30-foot long barge powered by two large outboards while one worker cut limbs and logs with a chain saw and another pulled huge swaths of the greenery onto the deck with a grapple.

The barge and the workers are from Aftermath Disaster Recovery.

After the barge was stuffed full, it was driven upstream to a takeout site. From there, the trees were transferred to land and then, by a huge Drainage District excavator, loaded onto a Drainage District truck for a trip to the burn pile.

One of the truck drivers said she’d carried seven loads to the burn site Monday, despite a short day caused by afternoon rains.

“I’m just glad to see something getting done,” said Tommy Clary, the north Orange homeowner who lives in a nearby neighborhood flooded by Harvey.

Cleaning the snags out of Adams Bayou was just one of Clary’s requests to make the water flow steadily south to Sabine Lake. Another request was to eliminate the low bridges over the bayou for the I-10 feeder roads.

Clary said he’s been told that TxDOT has decided to replace those bridges with lanes elevated beside the freeway overpass.

“Really, we’re getting about everything we asked for,” he said. “I’m pretty sure TxDOT is going to get the bridges out and the Drainage District is working on de-snagging and trimming the banks.

“That’s everything we originally asked for, but I’m afraid that’s not enough.

“I want them to make sure they’re doing everything possible to keep us from flooding again.”

Carona’s Drainage District workers have spent a good bit of their time since Harvey working to open up the water flow at the south end of Orange County.

“We’ve worked a lot on [FM] 1442 at the Bessie Heights ditch and other major outfalls to the marsh,” Carona said.

“I know the work we’ve done has dramatically helped drainage.

“The water levels are significantly less than we’ve had in the past. We really don’t need an engineer to tell us it’s working.” 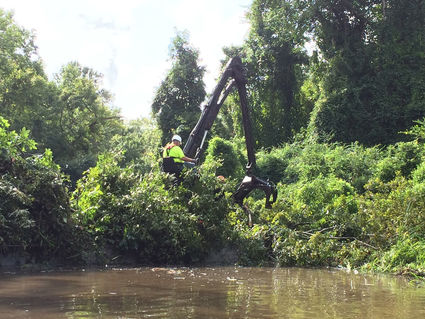