Gothia resigned as Orange County Precinct 3 Commissioner in order to apply for the job of judge. Kirk Roccaforte, a Bridge City council member and Bridge City’s representative on the Executive Committee, had to resign those spots to replace Gothia as commissioner.

Gauthier was voted in as Roccaforte’s Executive Committee replacement and Gothia actually replaced himself.

Previously, Gothia had replaced outgoing Precinct 2 Commissioner Barry Burton on the Executive Committee after Burton was defeated for re-election in 2018.

Gothia was promoted from First Vice-President to President at the start of 2019. But when he resigned as Commissioner July 2, he also resigned from the Executive Committee. Three weeks later, he returned as SETRPC Board president.

One of Gothia’s first act at the July meeting was to witness an award to Orange County Chief Sheriff’s Deputy John Tarver.

The veteran lawman was honored for his service on the group’s Coordinated Terrorist Preparedness Initiative, a multi-year program.

The Southeast Texas Regional Planning Commission covers Jefferson, Orange and Hardin Counties and is one of 17 Councils of Government in the state of Texas.

The COGs coordinate the transfer of state and federal funds to local needs in a number of taken-for-granted programs like Air Quality, 9-1-1 Emergency Network, Substance Abuse, Area Agency on Aging, Foster Grandparents, RSVP for seniors, Transportation Planning and Homeland Security.

Governmental program funds dispensed by SETRPC last year totaled $24 million. But that number has been higher than $50 million four times in the last decade, including 2015, when $73 million in Community Development Block Grants alone flowed into the three-county area as part of an $87 million annual total for government activities expenses.

The report was audited by Charles E. Reed & Associates of Port Arthur. Reed said the audit was “clean.” “Your financial position is healthy,” he said.

The report showed SETRPC had $8.4 million in its fund balance, with $5.4 million invested in capital assets and $3 million unrestricted.

Total expenses for government activities in 2018 were $23.6 million against total governmental activities revenues of $23.5 million.

The report, prepared by Griffith Moseley Johnson & Associates, concluded that many programs could transfer seamlessly but that other programs could prove problematic because of the added travel involved. 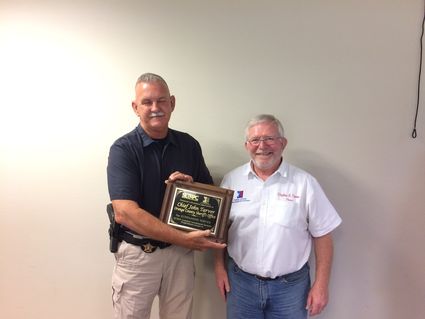 Glenda Lacy, SETRPC’s disaster recovery division director, presented a recovery update for Tropical Storm Harvey. She said Orange County still had 59 FEMA-provided mobile homes and RV trailers in use for those whose homes flooded. The good news is 528 of those temporary housing units have been turned in by county residents.

Overall, 1380 temporary housing units were set up under the FEMA program in the three-county area. Only 151 are still being used.

Pete De La Cruz, directory of 9-1-1 Emergency Network for SETRPC, won approval for a two-year budget of about $2.5 million per year.