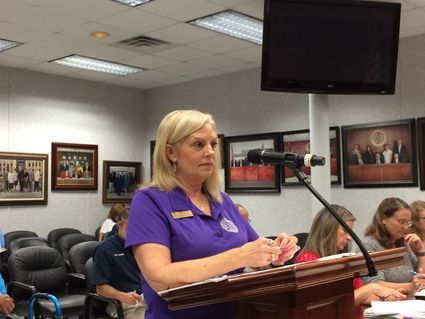 Three departments down, about $3 million on the capital expense wish list.

Orange County Commissioners held their first workshop for the 2020 budget Tuesday morning and spent nearly three hours listening as the heads of three of the county’s biggest departments listed their needs.

All this against a background that shows property tax values in the county have increased 8% since last year.

The effective tax rate is the rate that needs to be charged to bring in the same tax revenue as last year.

A year ago, the first year after Tropical Storm Harvey reduced 2018 values 10% countywide, the budget called for a $3 million deficit, with a predicted $49.4 million in spending against $46.4 million in revenues.

“The county passed a negative budget last year because of Harvey,” Commissioner Robert Viator said. “There’s no way you could go to the effective rate, because you’d passing another negative budget.”

These arrived on her desk last week from Scott Overton, the Orange County Chief Appraiser.

Fisher passed along word on the effective tax rate and showed that the rollback rate, the rate which would force a rollback election, is 56.519 cents per $100 value.

The rollback point set by the state, for this year and in recent years, is 8% above the effective tax rate.

“Our current rate [54.2 cents per $100] is between the effective and rollback rates, and the effective tax rate is a little skewed this year because of the effect of Harvey,” Viator said.

County Judge John Gothia would be happy for a third year at 54.2 cents.

“I don’t see a raise in the tax rate right now, but that’s up to the court,” he said. “The main thing is to be balanced.”

City managers in Orange and Bridge City have pushed a tax rate raise that would be just below the 8% rollback amount this year.

That’s because next year the state law changes and sets the rollback threshold at 3.5% above the effective tax rate.

“We’ll definitely want to know whatever we do [in this year’s budget], that we want to be able to sustain it. We have to take that into account,” Gothia said.

The Sheriff’s Office was the first to appear in Tuesday morning’s budget workshop and Sheriff Keith Merritt asked for 16 new $45,000 autos, and 15 new radios, plus tasers and a full-time registered nurse.

County Engineer Clark Slacum asked for five new pickup trucks for the road and bridge department, a maintainer service truck and three boom mowers to go with a promotion for his office manager.

Gothia suggested contracting out the mowing of the county’s main buildings to free up a full-time maintenance worker and Guidry agreed to look into it. The county’s head fixer-upper also asked for a new automobile for his department as well as a hydraulic lift for high-altitude jobs.

Leading off Tuesday afternoon’s commissioners’ court meeting, Guidry reported that the courthouse front entrance repair was complete and the scaffolding out front would come down any day, four years after crumbling marble made the front door off-limits.

Another bit of building news came from Emergency Management Coordinator Joel Ardoin, who told Precinct 2 Commissioner Theresa Beauchamp that FEMA had approved $296,084 to rebuild her Mauriceville office that was destroyed by the 2017 Tropical Storm Harvey.

County Auditor Pennee Schmitt paid $430,641 in bills and welcomed $3.7 million of FEMA buyback money by creating its own special budget until it’s paid out.