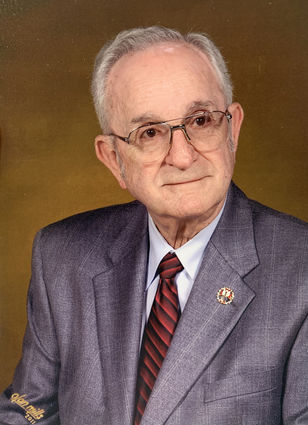 He was born on April 23, 1930, in Lake Charles, Louisiana. He attended the public school system and graduated from Lake Charles High School, John McNeese Junior College, and Louisiana State University in 1953, receiving a Bachelor of Science with a degree in Accounting and Business Administration along with an ROTC Commission in the Air Force. He served his active duty during the Korean War and obtained the rank of First Lieutenant. After his discharge he served an additional tour of reserve duty and was promoted to Captain.

Following his military service he was employed by Firestone Tire and Rubber and trained as a Traffic Clerk. In 1962 he was transferred to the Orange, Texas Plant where he served as Purchasing Agent for thirty years, retiring in 1992.

Tony served as President of Lake Charles Junior Chamber of Commerce and Executive Vice President of Louisiana Junior Chamber of Commerce. He was a member of Sacred Heart Council 8406 Knights of Columbus serving in numerous offices including Grand Knight and a member of Santa Maria Assembly 1100 Fourth Degree Knights of Columbus services as Color Corp Commanded and Faithful Purser. He was also a member of American Legion Post 250 of Bridge City, Texas.

He is survived by his nephews, Samuel Rhame, of Pottstown, PA and Kevin Rhame and wife Mimi, of Lake Charles, LA.

His hobbies were his love of religion, golf, and love for his dogs and cats.

A Mass of Christian Burial will be celebrated at 10:00 a.m., Wednesday, August 7, 2019, at St. Henry Catholic Church with Father Steve Leger officiating. Entombment will be held at Consolata Cemetery in Lake Charles.

In lieu of flowers, donations may be made for masses at St. Henry Catholic Church or to you charity of choice.