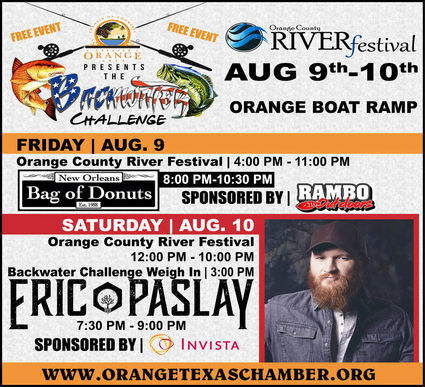 Anglers will have their pick at this weekend’s Backwater Challenge and Orange County River Festival.

They can go after the freshwater bass or saltwater redfish.

Between 150 and 200 teams are expected to compete.

The fishing begins at “safe light” Saturday, Aug. 10 and ends both at the Orange Boat Ramp on Simmons Drive.

But the event put on by Metreyeon and tournament director Tony Viator with the assistance of a Greater Orange Area Chamber of Commerce fishing co-chairmen David Jones and County Judge John Gothia will be surrounded by the River Festival that runs from 4 p.m. to 11 p.m. Friday Aug. 9 and from noon to 10 p.m. Saturday.

For the fishermen, it all starts at the Captain’s Dinner at 5:30 p.m. Friday at the Shahan Center at Lamar State College Orange.

The dinner marks the final chance to register for Saturday’s fishing.

Both the trout and redfish divisions have a guaranteed first prize of $7,500.

A formal ribbon-cutting for the Festival is set for 5 p.m. Friday, says Ida Schossow, Chamber president.

That will be followed at 5:15 p.m. by a ceremony acknowledging the Rebuild Texas Foundation for all its help in the area with recovery from Tropical Storm Harvey.

Food vendors, soft drinks and adult beverages will be available both days.

Entertainment will be provided from 8 p.m. to 10:30 p.m. Friday by Bag of Donuts and from 7:30 p.m. to 9 p.m. Saturday by Nashville recording artist Eric Pasley, a native of Waco.

“It’s a regional tournament, which gives local people the opportunity to fish in it,” said Gothia, who with the Chamber has helped shepherd three national Bassmaster tournaments to the Sabine River.

“It’s kind of unique that you can do both bass and redfish in the same tournament. And anytime we can promote our waterway, it’s a big deal.”

Metreyeon said he and Viator had formerly been involved in running the Cops Helping Kids tournament out of Sabine Pass that was a partnership with the Jefferson County Sheriff’s Association.

“That tournament had been shut down for three years, now and me and Tony decided to come up with something new,” he said.

“We thought Orange would be a good place to have the tournament. You’ve got kind of a brackish water that would support both redfish and bass.”