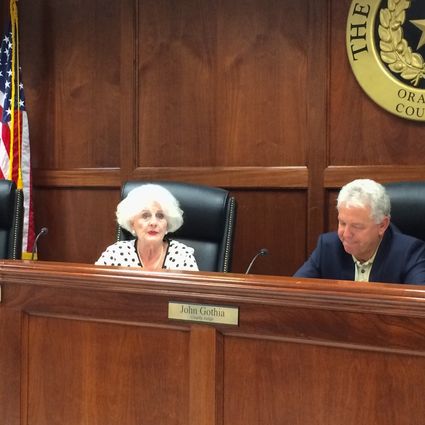 Orange County commissioners voted a month and a half early not to raise the county tax rate.

And the commissioners did it while teaching a lesson about public perception.

Item 9 on the agenda called for “possible action regarding the proposed tax rate,” and County Judge John Gothia explained that preliminary rate, set before the hard work of making the numbers fit, could be anywhere under 56.519 cents per $100 without asking taxpayers to vote on it.

The only catch was that the 2019 tax rate could not go higher than whatever proposed rate was set Tuesday.

The prevailing opinion seemed to be to set the proposed rate between last year’s rate of 54.2 cents and the rollback rate of 56.519 cents.

“I would rather ya’ll propose the maximum. That’s not saying you are going to go there,” she said. “John [Gothia] is not wanting to go over that 54.2, but at least it would give him the leeway,” she said.

Gothia and Commissioners Theresa Beauchamp and Johnny Trahan all talked about the possible need of upping the tax rate a tick or two to provide county services.

“The duty of this court is to serve the citizens of Orange County. That’s giving them roads, drainage, the protection of the sheriff’s department,” Gothia said. “Those costs go up every year. If we’re working with a narrow budget, when we get to a point where we say this is all we can spend, then sometimes we have to cut services.”

But Commissioner Kirk Roccaforte disagreed on the need for a cushion.

Commissioner Robert Viator quickly offered a motion to adopt the current rate of 54.2 and Roccaforte seconded it.

On a roll call vote, Viator and Roccaforte voted for keeping last year’s rate. But it still appeared that the judge and the other two commissioners might out-vote them.

Beauchamp said it simply: “I am not for raising taxes, but I am for giving service.”

And she voted no.

But he voted “aye,” on Viator’s motion, making a majority in favor of keeping the 54.2 rate. Gothia quickly went along with the winning side in the 4-1 vote.

“The problem when you set that high end, everybody thinks that means you’re going to raise the rate,” Trahan said. “No matter what you do, everybody gets nervous.”

Beauchamp was not enjoying being odd commissioner out.

“Now everybody’s going to think I want to raise taxes,” she complained.

Commissioners’ Court will hold two public hearings before the tax rate is finalized. The first will be at 1 p.m. Friday, Aug. 23 and 1 p.m. Tuesday, Aug. 27.

The commissioners spent a lot of time on the next item before Trahan’s motion to add a 25 cent “child safety” fee to all county taxpayers failed because it lacked a second.

Kurt Guidry, county maintenance director, reported that as of Tuesday afternoon the front entrance of the historic Orange County Courthouse was open to the public for the first time in four years.

After the county paid for the initial installation, Top Deck, Inc., of Mauriceville, had provided rent-free the scaffolding that first served as a safety barrier to avoid injuries due to loose marble on the building’s front. Later it was used by contractors who reattached and reinforced the marble.

The county agreed to pay $4,999 to Bar Z Mobile Development to renew the Slice of Orange mobile app used to communicate government news to the public.