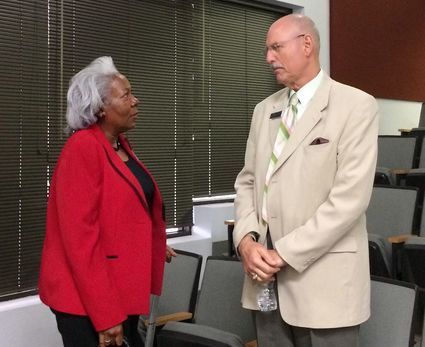 Well, it’s down to the final two for Orange’s new city manager.

“We had two interviews today, they interviewed both candidates and they’re going to make a decision next week,” Bob Turner of Strategic Government Resources said.

“If they don’t make a decision next week on a finalist, then they’ll decide a different direction to go. But I anticipate there will be some decision made next Tuesday.”

Mike Kunst, Vidor city manager, and Cynthia Northrop, assistant to the city manager in Alvin, were the two finalists interviewed for about 30 minutes each in a nearly two-hour closed session.

A third candidate was invited to interview, but took themselves out the running.

“We had one applicant that was unable to move forward, yes,” Turner said.

Also Tuesday morning, council members got their first look at a proposed budget for the fiscal year 2020, which begins in October.

Council members were to meet again at 4:30 p.m. both Wednesday, Aug. 6, and Thursday, Aug. 7 for open budget workshops and closed meeting concerning contract negotiations with fire and police associations.

Members of Orange City Council refused to comment on the process of replacing 13-year city manager Shawn Oubre, who resigned last October in order to take another job near Waco.

They referred inquiries to Turner, whose company is being paid $26,500, plus expenses, by the city to conduct the executive search.

Kunst is a native Vidorian who earned his bachelor’s and master’s degrees from Lamar University, according to his online resume posted by the Texas City Management Association.

He spent 20 years in the Texas National Guard, was a funeral director for 20 years and has been Vidor’s city manager since 2013.

According to Northrop’s TCMA resume on line, she received both bachelor’s and master’s degrees from the University of North Texas in Denton and was a Denton County Commissioner from 2001-2008.

After that, she worked as a communications pro for nearly 10 years – including five for TxDOT, before hiring on at Alvin in May of 2018.

Turner explained that Orange City Council had a full plate, what with annual budget talks going on.

“They’ve got some other things going on right now – two budget hearings going on – and this was an awful lot for them to get through,” he said of Tuesday’s interviews.