Orangefield school trustees took a look Monday night at a first draft of the district’s 2019-2020 budget and liked what they saw.

Thanks to the Texas Legislature, it would include $2 million more in spending than a year ago and lower the tax rate 10 cents per $100 value.

“I hope you understand this is a forecast,” Shaun McAlpin, assistant superintendent said as he and Superintendent Stephen Patterson introduced the set of numbers.

“It’s a framework. Now we have to work on the line items.”

Both explained that many of the numbers plugged into the forecast would not be final until later in the school year for the Orangefield district, which holds its first day of class Wednesday, Aug. 14.

For instance, they introduced an estimate of state revenues of $10.16 million and showed an increase of $2.02 million over last year.

“We don’t get our final settle-up with the state until after September,” McAlpin said.

The school district will hold another meeting next week to settle on line items in the budget and finalize a notice of the proposed budget and tax rate.

After that will come public hearings before the numbers are finalized for the new fiscal year, which begins Sept. 1.

McAlpin said the comparisons between new and old budgets were not made against last year’s final revenues and expenses but rather the budget passed last August, before budget amendments made during the school year.

The district has spent more than $8 million in building repairs and improvements since Tropical Storm Harvey in 2017. It borrowed $3 million in a short-term loan, but is rapidly repaying that loan, McAlpin said.

The Texas Legislature in May voted to spend $11.6 billion statewide on education, which broke down to $6.5 billion for public education and $5.1 billion for property tax relief.

Property tax values across Orange County have risen 8%, according to the Orange County Appraisal District. That means a homeowner’s school tax bill could increase despite the cut in tax rate.

The $2 million-plus in increased state funding in Orangefield’s budget will be used to pay for just over $1 million in employee salary increases and the addition of four newly created teaching jobs. 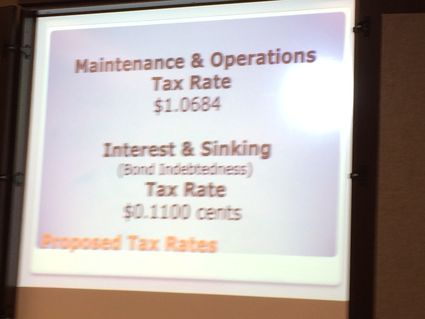 The breakdown: an average teacher pay raise of 11.84%; a counselor and nurse midpoint salary increase of 10% and a 9% salary increase for the remainder of its 250 employees.

Patterson pointed out that last year’s $8 million balance included the borrowed money. He added that FEMA recently OK’d a Harvey reimbursement of $3.2 million to the district, which will pump up the fund balance.